The British Veterinary Protection Plan and the BBC 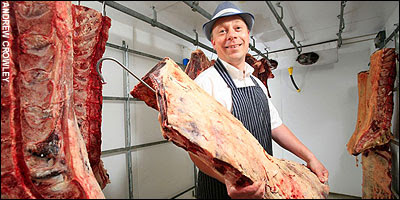 
I like steaks and porkchops well enough, and I bet you do too.

I will also bet that Guy Lynn likes the occasional steak and chop as well. But I wonder if he would like them quite as well if he knew that the cattle and pigs he eats are (gasp) routinely administered antibiotics by farmers that are not veterinarians, and that (double gasp) cows and sheep are routinely dispatched in the rural countryside by a single bullet to the brain.

What the hell am I talking about? And who is Guy Lynn, anyway?

Lynn is the "Look North Rural Affairs Correspondent" for the BBC. In short, he is a reporter.

More importantly, he is the reporter who recently sent nearly-70 year old dog man Ginger French to the penitentiary for the "crime" of selling antibiotics and vaccines without a veterinary license.

What's that, you say? Since when is selling vaccines and antibiotics a crime?

Well, it's not a crime in the U.S. In fact, every veterinary catalogue in America sells vaccines and antibiotics without a prescription, and the Terrierman.com web site will give you dosage information as well as show you how to give a puppy shot. There's nothing to it.

In the U.K., however, veterinarians managed to get a law passed making it illegal for a private citizen to sell vaccines or antibiotics to treat dogs.

As a consequence, if your running dog rips himself on a barbed wire fence in the U.K., you have to decide whether to risk doing nothing and have the wound go bad, or shell out a fairly significant amount of money to go to a veterinarian who will charge you 100 pounds sterling to slap three foil strips of clavamox or cephelaxin on the counter. No money? No treatment.

The same extortion game goes on for other kinds of minor health concerns, such as puppy protection shots and urinary tract and ear infections. Pay up or let the dog suffer.

BBC rural affairs reporter Guy Lynn was apparently horrified when he found out that Ginger French was selling antibiotics and vaccines without a license.

He was even more horrified to find out that Ginger would put down a dog with a .22 shot to the brain if that was required by its owner. The BBC 's rural affairs reporter was, in fact, so horrified that he secretly taped Ginger selling him antibiotics and detailing his price schedule for services. Then he added fake graphics and store-bought B-roll to his segment to suggest that Ginger French was operating on dogs (he was not), and that he was selling medicines other than those you can get out of a catalogue without prescription here in the U.S. and much of Europe (he was not).

To which I have to ask only one question: You're sure this is the rural affairs reporter for the BBC?

You see, Ginger French was not doing anything that farmers all over the U.K. and the world do every day.

British farmers dose their owns cows and pigs with penicillin and they feed truck loads of antibiotics to their chickens without a veterinarian in sight.

It's all perfectly legal.

Pigs and cows are vaccinated by farmers too, and those farmers are not veterinarians; some of them can barely read.

As for dispatch, surely Guy Lynn does not think the cow that was the progenitor of his steak-on-a-plate was put down with pentobarbital in a veterinarian's office? No, it was not. It was shot through the brain with a captive-bolt gun or a bullet, and I assure you that the fellow running the dispatch position on the killing line was not a veterinarian playing soothing classical music in an air-conditioned office.

In fact, if it is done right, death by bullet to the brain is instantaenous and not cruel. If you study human suicides, you will find that more people chose to kill themselves by a gunshot to the head than all other methods combined.

The objections to shooting a dog then, is not about ethics, it is about aesthetics.

In fact, the British are not really very high-minded about shooting a dog outside of the vets-for-pets craft guild created by the U.K. veterinary restraint-of-trade laws.

For example, if your dog is found worrying sheep, it can be shot dead on sight. And I assure you that when a running dog is shot dead by an agitated farmer, it is not shot cleanly through the head. It is gut-shot, or shoulder shot. And that's perfectly legal. What is not legal is paying an experienced dog man to do euthenasia with a .22 short round directly to the brain.

And let's be clear: low-income people were not going out of their way to see Ginger French because they do not care about their dogs. They were going to Ginger because they DO care about their dogs. They were driving some distance and paying money, but they were paying less money to Ginger because, in all liklihood, it is all that they could afford. Not every one is lucky enough to have a trust fund and a fat wallet.

French was NOT doing surgery on dogs; he was sticking to the basic stuff that anyone can do -- antibiotics, puppy vaccines, tail nips, and the like.

The case was never made that the antibiotics and vaccines that Ginger French was selling were defective in any way. In fact, they were perfectly fine. Antibiotics in pill or capsule form are good for as much as a decade past their expiration date, and dry vaccines too are quite safe and can be stored for a very long time. These things are available over the counter or by mail to regular people all over the world outside of the U.K.

In fact antibiotics and vaccines are so safe that we let farmers the world over do their own work rather than have veterinarians unnecesarily drive up the price of beef, chicken, lamb, pork and fish.

But in the U.K., they have allowed veterinarians to have the monopoly on dogs and cats even for the basic stuff like vaccines, tail docking, and antibiotics.

And so nearly 70-year old Ginger French has to go to jail for a year so that veterinarians can ply their game of economic extortion; a game of "give me your money or lose your dog's life."

This travesty has made Earth Dog - Running Dog editor David Harcombe grieve for the state of his nation. In an editorial in the current issue of the magazine (Sept. 2007), he writes:

"What a hell of a mess we have made of our nation. I used to be proud to be British. Now I am ashamed of a country which can send an elderly man to prison for a triviality which hurt no one except perhaps the pockets of a few vets. Our spineless, politically correct politicians have brought us to this."

To which I can only reply, "Amen."

Email ThisBlogThis!Share to TwitterShare to FacebookShare to Pinterest
Labels: antibiotics

Your point about aesthetics is an important one.

It seems to me that many objections to hunting in the US actually have the same basis: some people who eat meat think hunting is bad because it looks bad to them, while eating meat that comes on a styrofoam tray is clean and comforting.

But of course you can't say "it's aesthetically unappealing," so you say it's "cruel" instead.

I wonder if drowning is considered a humane form of euthanasia. It's not practical for an animal that doesn't fit in a bucket, but it is "aesthetic" and unlike poison, leaves a corpse that can be buried without contaminating the soil with dangerous drugs. I wouldn't expect a farmer, rancher, or even a puppy mill would want toxic flesh in their soil, and cremation isn't easy to accomplish by any means.

Drowning takes too long, and like poison is something I think is simply not necessary. Go to a vet if you have the $50 (and honestly, 99.99% of all people do). If you really have no money (or the animal is suffering by the road, etc.,) use a gun, or if you do not have a gun, then a hammer or other very heavy hard object that can be swung with force will do. Cows are routinely killed with sledge hammers to the cranium, and it works fine in the absenece of a captive-bolt gun or a .22. The goal is speed, and by speed I mean ending brain activity. Drowning is very slow because essentially it a tye of suffocation. Very few suicides are done by drowning.

"What a hell of a mess we have made of our nation. I used to be proud to be British. Now I am ashamed of a country which can send an elderly man to prison for a triviality which hurt no one except perhaps the pockets of a few vets. Our spineless, politically correct politicians have brought us to this."

This is an example of the tyranny part of what the late Sam Francis described as anarcho- tyranny.The appellation seems to fit the political system of the UK even more than that of the US.

Sam Francis is dead? WONDERFUL! I bet he's very warm right now.
Francis was a stone racist, the editor of the Council of Conservative Citizens' newspaper for many years, and about as loathesome a person as has ever been hatched in this country. He's dead? Yahoo!! This is a fellow who was great friends with former Ku Klux Klan Grand Wizard David Duke who called him "a true brother in the Cause." He was not just an embarassment to conservatives; he was an embarassment to America and left a permanent stain on the immigration debate. He's dead? I will put Garth Brooks on the CD in celebration. Yes, indeed, this nation is indeed getting better, if for no other reason than Sam Francis is dead.