The Kids are More Than All Right 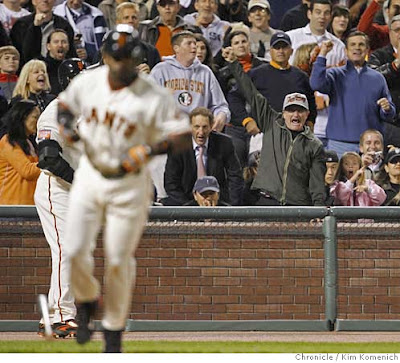 In the picture, above, which appeared in The San Francisco Chronicle on Saturday, New York Yankee fan Billy Crystal is slumped with just his hat and hand showing, while San Francisco Giants fan Robin Williams goes crazy as Ray Durham walks to load the bases.

The cute Korean kid just to the right of Robin Williams (blue baseball hat turned backwards) is my son, who was in San Francisco watching the Yankees and the Giants battle it off. Two of our good friends have a financial interest in the Giants, so Austin and my lovely wife have seen them play in the World Series, and we have all watched them play in New York and Baltimore as well. This is the second year in a row that Austin has had the good fortune to have seats right behind Crystal and Williams.

Austin graduated from High School on Thursday, flew to California on Friday, came back home to Arlington last night, and flew off again this morning (a 7:30 am flight means I had to get up at 4 am) to Utah for a 16-day whitewater trip down the Green River as part of a National Outdoor Leadership School course.

The daughter is just back from a four-day rock concert at Bonaroo (I still do not have my tent back) and is off to Thailand for five weeks of service work on July 5th (teaching English to little kids), and then goes off to the U.K. for a University of Virginia semester in London.

Meanwhile, I have not had a decent vacation in years. Something is wrong here.

Actually, despite what it sounds like, the kids are not too spoiled: Sarah has excellent grades and has worked every single day she has been home except for the four days at the rock concert, while Austin worked very hard in high school, had a great year pitching varsity baseball (four year playing varsity) and will be painting the house to work off his debts as soon as he gets back from Utah. In the Fall Austin goes off to Philadelphia for a year of public service work in inner-city schools before heading off to college.

If the kids would take up fly fishing, I would consider them just about perfect.

What do you need a vacation for? You have all those weekends in the woods with your dogs.

what a poor American you are. Apparently you did not force feed your kids enough Lucky Charms, McDonalds and TV to make them like the rest of us.

I know this is super old, but thank you for sharing one of the best giants pictures I've seen in a long time...