The Fox Versus the Stork 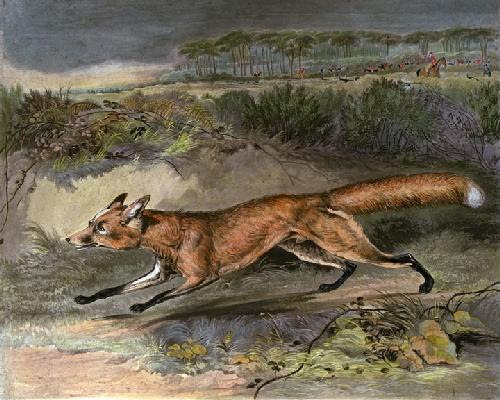 This is a repost from this blog circa July 2005:


The states of Virginia and Maryland can be described as "the mother church of fox hunting in America."

Robert Brooke of Maryland introduced fox hunting to the United States in 1650 and imported the first pack of foxhounds from Great Britain at that time.

To this day, Maryland and neighboring Virginia are the center of mounted fox hunting in the U.S., providing good cover for a healthy fox population as well as fairly dense numbers of raccoon, groundhog and possum.

The Jack Russell Terrier Club of America holds its annual National Trial in October in Havre de Grace, Maryland, about an hour up the road from my house, and many people who hunt terriers will spend at least one week of their lives attending this trial and, if they are lucky, hunting farms in the days before or after the long weekend.

While there is still a lot of open space in the Baltimore-Washington area, no one can deny that there has also been a very rapid growth in sprawl.

National Forests and state park land may be the same distance from home that they have always been, but increasing amounts of traffic make the trip seem longer and certainly less enjoyable.

The distance out of the city to sizeable farms is growing as land prices rise, and estate taxes force subdivision.

The simple and sad truth is that farming has become less profitable than construction of mini-estates.

The animated map, below, shows population growth and sprawl in the Washington, D.C.-Baltimore corridor between 1792 and what is expected for 2075. The interval between each slide is 25 years, and I have put the data for each slide in the lower right hand corner.

While population growth in the Baltimore-Washington corridor has been rapid, the effect on local habitat can best be seen by looking at a smaller slice of land.

To bring it back down to terrier history, let's look at Fairfax County, Virginia which is just 15 minutes up the road from where I live.

The first fox hunting pack maintained for the benefit of a group of foxhunters, rather than for a single owner, was instituted by Thomas, Sixth Lord Fairfax, in 1747 in northern Virginia.

Lord Fairfax swapped hounds with George Washington who lived just up the road at Mount Vernon. To this day, Virginia proudly counts fox hunting as part of its cultural heritage. The state dog is the foxhound, and the Master of Fox Hounds Association of America is headquartered in Millwood, Virginia, about 35 minutes away.

While Lord Fairfax may have lived to fox hunt, there are no mounted fox hunts in Fairfax County today, and only a few farms worthy of the name. Most of the forest fell to farms in the 1960s and 1970s, and most of the large farms have since fallen to tract homes, mini-estates and freeways.

The map below gives a visual presentation of what happened to Fairfax County, Virginia between 1937 and 1998, a period of just 60 years. As can be seen, very large blocks of forest fell to develoment between 1978 and 1988. It was during this period of time that major roads, such as I-66, were constucted. These roads effectively served to subsidize environmental destruction and the loss of farmland.