A Polar Bear in a Roadside Zoo 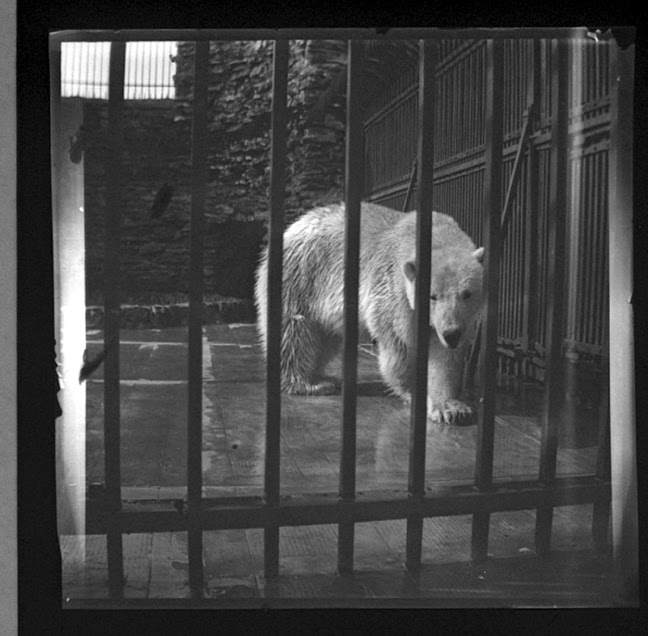 The internet is this beautiful thing. It's a million times more powerful than the ancient library that burned in Alexandria, and a million times larger than all the coffee houses of Vienna. And though a lot of true ugliness comes out of it, sometimes some really great people are located and some shining talents rise up to smack you in the head

This is one of those stories.

A daisy chain of good things started with a note from Gregg and Soo Barrow in Texas. Gregg is houndsman and breeder of working Giant Schnauzers. He had been reading the blog from time to time, and had also stumbled across a speech I had given on street drug markets. He liked the speech and shot me a line to say so -- much appreciated

Gregg, in turn, mentioned the blog to Matthew Mullenix, a hawker in Louisiana who has his own web site and blog. I love hawks (I used to work for Audubon). It turns out that Matthew and I have at least one common acquaintence in the hawking world. It is a small world, after all.

Mathew, in turn,, mentioned this blog to Steve Bodio in New Mexico, another hawker and dog man who also happens to be an author.

Steve shot me a line to say "hi" just as I was coming to his essay in David Peterson's anthology on hunting ("A Hunter's Heart").

How odd is that? Pretty odd.

Well, to be make a short story long, I started reading Steve's Blog which he writes with Matthew Mullenix and Reid Farmer, and then I started reading the blogs linked to that blog. And then I ordered off for two of Steve's books.

Let's start with a quick book report. The blogs are great but the books are really good stuff. I will not review two books at once, but this is what I wrote Matt as I started the first:

I got one of Steve Bordio's books in the mail yesterday (On the Edge of the Wilds) and I am just 9 pages into it and am knocked out. It's depressing to find smart sons of bitches who can really right and actually have something to say, 'cause basically you know you will never be able to say it half as well. On the other hand, it's exhilirating too -- new ideas and turns of the phrase that just pop in your brain. I feel like an apartment dog taking his first long walk though a zoo. Pretty grand this place!

In the pages I've covered so far, Steve's talking about the smug disdain that the well-bred, over-fed, I-got-me-a-medical-plan and a college education crowd feel towards people that work with their hands and, conversely, the folks that actually own large ranches and farms.
It's more than the fact that Steve says it all very well (smooth, smooth); it's that he has something to say that really needs to be said and (as far as I know) has not been said before. I think it must help to be from the East and have gone West and stayed and really paid attention -- it is an expatriot journey every bit as clarifying as what deToqueville did (and certainly just as far geographically). It is an old observation that to write best about Somewhere it helps to be from Elsewhere -- Hemingway in Idaho and Florida writing about Paris, etc. Anyway, it is at some level depressing and inspiring to read something this well put together. Writing this good reminds me that done properly writing is more than typing -- it is craft.

All of this to say that I have finished the first book, and will start the second today. A third book on pigeons is already ordered.

Does any more need to be said? This is a writer worth reading and I am going the distance with the books. And the blog is a link off this one now -- as are the others.

As I told Matt after reading Steve's Blog (and Matt's and Reids) and several of the blogs linked off of it (The Alpha Environmentalist, Operation Desert Dove, the Nature Blog):

"For the longest time I have felt a little like a polar bear at a road-side zoo -- pretty sure there must be others like me, but without much evidence of that reality. Now I see there are others out there with a similar bend in the brain -- not a lot of us, but more than one, and that's a pretty thrilling thing on this end. I know some professional environmental types, but I have to say most seem to know almost nothing about critters -- it's either an academic excercise or a romantic thing, or a legal construct (lots of lawyers!) or else it's just the fear-mongering tribe they chose out of college. For whatever reason, there is often not much real connection to things that snap or go squish under foot, or that fly up or bite back in the hedge. A dissapointment."

But not a permanent disappointment. One of the great things about the internet is that all of the red-headed Eskimos on the planet can now find each other.

There may be only a few of us in the tribe, but the world as we know it did not really start with too many more than that.

Two will do, and we already have more than that.
.