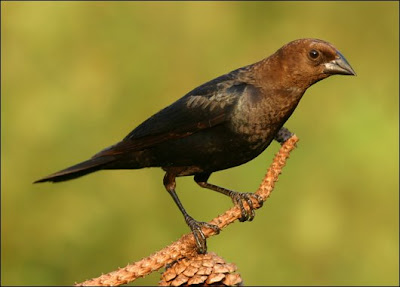 The National Audubon Society's Christmas bird count is a pretty good organizing tool, but a little weak on science, since it is mostly counting bird-feeder birds that are not in too much danger of loss.

U.S. populations of Henslow's Sparrow, Cassin's Sparrow, Grasshopper Sparrow, Field Sparrow, Savannah Sparrow, and Vesper Sparrow exist in numbers only a fraction of what they did in the 1850s when the tall grass prairies had yet to fall under the plow.

Over the course of the last 20 years alone, the Breeding Bird survey has enumerated a very rapid decline in these birds that seems unrelated to loss of land across the U.S. Other grassland birds also seem to be in decline, especially such sparrow-like birds such as the Bobolink, the Dicksissel, and the Western Meadowlark (the state bird of Kansas, Montana, Nebraska, North Dakota, Oregon and Wyoming).

What is going on? The short answer is industrial agriculture.

As human population numbers have increased in the U.S. and across the world, more and more pressure has been put on America's farm land -- the source of 15% of the world's cereal production.

The good news is that record crops are being produced despite the fact that less and less land is being put under the plow.

The bad news is that this increased production has required more automation, less fence-row cover, and more intensive management of farm habitat than ever before.

A good example of what is going on can be seen by taking a look at America's hayfields. While 40 years ago a hay field might have been harvested once a year, most hayfields are cut three times a year now, thanks to automation. The second and third hay harvests typically occur just as grassland birds are breeding.

The good news is that while we are farming our most productive lands more intensively, we are putting a lot of marginal farm land into a Conservation Reserve Program (CRP) started in 1982.

The CRP has worked to take more than 32 million acres of farmland out of production in order to slow top soil loss and exhaustion, and to provide habitat for native plants and animals. CRP lands now total more than 50,000 square miles across the United States, and make up vast stretches of some prairie states.

Unfortunately, despite the extensive acreage put into the CRP program, it has not been enough to reverse the decline of some grassland bird species.

One problem is that much of the land in the CRP program is in relatively small blocks, often bordered by working farms. This "edge" habitat is perfect for deer, fox, raccoon, raptors, pheasant, grouse and turkey, but it is not always conducive to the successful breeding of grassland birds, many of which only do well in very large blocks of prairie devoid of trees.

In fact, because the population of medium-size predators such as fox, raccoon, possum and hawks is high in edge habitat, grassland nest mortality of small grass-nesting birds is often unnaturally high in small-acreage CRP locations.

In addition, the tree cover provided by old farm windbreaks and shelterbelts provides a near-perfect habitat for the brown-headed cowbird.

The brown-headed cowbirds is a brood parasite species which lays its eggs in nests of other birds and leaves them for the host bird to raise.

Because cowbird eggs hatch a few days before those of their hosts, the larger cowbird chick is able to push out the eggs and chicks of the host bird, thereby winning all the food resources for itself.

The destructive capacity of the brown-headed cowbird is hard to overestimate: a single female can destroy the clutches of 20 or more song birds in a single season.

Would I advocate shooting a cowbird? In a minute.

In fact, in some areas the only way to get native bird species back up to acceptable levels is with Larsen Traps designed to catch cowbirds. To learn how to build a cowbird trap (a good project for a boy scout !) click here.
.

We have so many darn cowbirds around here it's disgusting.

Just as long as you remember that it's a sin to kill a mockingbird.

Water Over The Dam said...

Industrial agriculture is slowly rolling across the small farms of mid and southwest south Michigan, and the first thing to go are the game corridors and roadside trees. Where I live there are plenty of woods, rivers and roadside sugar maples planted over 100 years ago (and lots of game and hunting) but go 20 miles east and the land is stripped bare. 'To make it easier to turn the irrigators' some say, 'to get in one more row of corn' others say (no rows, I know, it's drilled) but whyever, there it is. Logging trucks with immense logs roll through town daily. I don't think I've seen a cowbird, but I guess I will.