"We Don't Need No Thought Control" 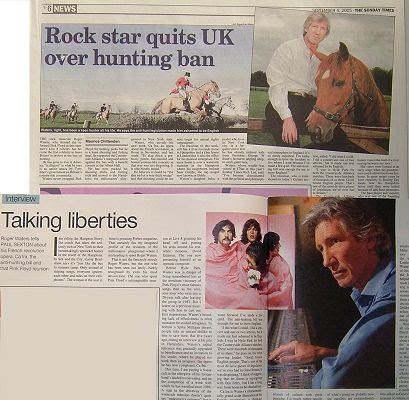 From the Sunday Times of London:

THE rock musician Roger Waters, who fronted the reformed Pink Floyd at this summer’s Live 8 concert, has become the first celebrity to leave Britain in protest at the ban on hunting. He has gone to live in America “in disgust” at what he says is an unfair attack by Tony Blair’s government on Britain’s countryside community.

Waters never swapped Pink Floyd for hunting pinks but he is a keen shooting and fishing man. He supported the Countryside Alliance’s rearguard action against the ban with a benefit concert at the Albert Hall.

He has now packed his shooting sticks and fishing rods and moved to the Hamptons, the millionaires’ playground in New York state.

Waters, who unveils his new work, Ca Ira, an opera about the French revolution, in Rome in November, said last week: “To slap down a perfectly gentle, fair-minded and honest yeoman-like minority in that way was just disgusting. It is also bloody stupid.”

He believes it could be “the thin end of a very thick wedge” and that shooting could be the next target for animal rights campaigners.

The musician, 61 this week, still has a £1m riverside home in Hampshire and a £6m house in London that is also the office for his musical enterprises. His main home is now a waterside mansion in the Hamptons where his neighbours include Sean Combs, the rap mogul now known as Diddy.

Waters’s daughter India, a model who lives in New York city, is a frequent visitor and he has already ordered rods from President George W Bush’s favourite angling shop, to catch giant tuna.

Waters, whose wealth was valued at £78m in this year’s Sunday Times Rich List, said: “I’ve become disenchanted with the political and philosophical atmosphere in England. It’s so mealy mouthed. I’m lucky enough to have the freedom to live where I want because I’ve made a few quid. The anti-hunting bill was enough for me to leave England.”

The musician, who is interviewed in today’s Culture section, added: “I did what I could. I did a concert and one or two articles, but it made me feel ashamed to be English.

“I was in Hyde Park for both the Countryside Alliance marches. There were hundreds of thousands of us there. Good, honest English people. That’s one of the most divisive pieces of legislation we’ve ever had in Britain.”

The Countryside Alliance hailed Waters as the first person to carry out his threat to leave Britain. At the height of the hunting debate several prominent hunt supporters said they would consider leaving if the bill became law.

The Prince of Wales, who hunted with the Beaufort Hunt along with princes William and Harry, is reported to have told a government minister at a private gathering that if the ban went through he might as well leave the country and spend the rest of his life skiing. Others said they would move their hunting activities to Ireland.

An alliance spokeswoman said: “We have had one or two people who would have left Britain anyway but Roger is the first to quit because of the hunting ban.”

Waters said in one interview: “Some of us are gatherers and some of us are hunters. I’m a hunter. I need the mud of a river oozing between my toes.”

His views were formed at an early stage when his grandparents used to drive him to see foxhunts. In more recent years he went regularly to Boxing Day meets near his Hampshire home until they were halted because of anti-hunt protesters.

The bass player and vocalist, who was one of the founding members of Pink Floyd 40 years ago, was also a member of a “shooting supergroup” that included Eric Clapton, the guitarist, and Stevie Winwood, the former Traffic singer who is the son of a gamekeeper.

The trio have regularly shot at Stanage Castle in the Welsh Marches, home of Jonathan Coltman-Rogers, high sheriff of Powys. Lord Heseltine, the Conservative former deputy prime minister, is another regular gun there.

An insider said: “Roger is not a son of the countryside but Stevie has authentic country qualifications. When these lot turn up in their plus fours, they out-country-gent the country gentlemen.”

Email ThisBlogThis!Share to TwitterShare to FacebookShare to Pinterest
Labels: ban