The Questing Tick And Your Dog 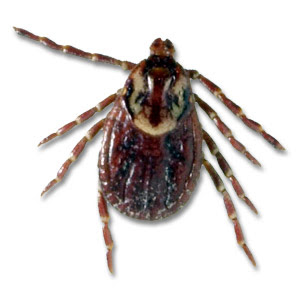 Summer is here, which means tick season is hard upon us.

American Dog Ticks are known as "three-host ticks," because they have three different host animals in their lifetime.

First, the larva hatch out from the eggs, which may have been deposited in a den frequented by fox, raccoon, possum or groundhogs. Larvae only have six legs, like an insect, and are white. 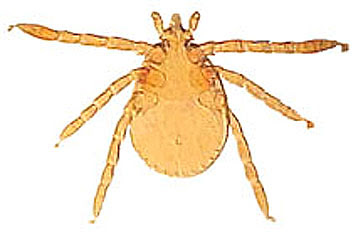 The larva will stay on the ground or climb up a plant or shrub to wait for a host to pass by. The larva will wait with their front claws outstretched to grab the first small mammal that comes by -- at this stage it is called a "Questing Tick."

The first animal to go by is is usually a mouse, rabbit, squirrel, or chipmunk. The larva will drink its fill of blood on this first host animal (a period of about four days) and then drop off.

Next the larva will shed its skin and become a larger eight-legged nymph tick. These nymph ticks are still very small, and will look for a new host which is likely to be another small mammal such as a possum, raccoon, groundhog or fox.

Once the nymph has grabbed on to a new host, it will again drink more blood (this time for a period of about six days) before it drops off again and molts a second time.

During this third stage of a tick's life, male and female ticks will look for a larger mammal to serve as a host. This mammal might be a raccoon, possum, fox, skunk, woodchuck, deer, dog, or even human. The male will not feed at this terminal stage of its life cycle, but will mate with the female as she feeds on the host animal.

After mating, the male will die and the female tick will engorge herself before dropping off the host animal to lay her eggs -- many as 4,000 of them -- on the ground.

If a tick falls off a groundhog, fox, raccoon or possum in an earth den, the larva may hatch out, with thousands of little white tick larvae waiting to latch on to your dog. These "seed tick" infestations will require several flea and tick dips, and very systematic work with a flea comb, to clear from a dog's fur follicles.
.
.