Robot of the Caves of Lascaux 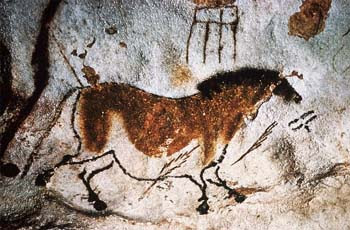 On September 8, 1940, a 17-year-old french boy by the name of Marcel Ravidat took three of his friends looking for a lost treasure that was supposedly buried in a secret tunnel.

Marcel's dog, a terrier by the name of "Robot," ran ahead. The dogs disappeared and, after a bit of looking around, the boys found it had gone down a hole.

Marcel and his friends were sure they had found an entrance to a treasure-filled tunnel. Young Ravidat tried to explore the tunnel himself, but without a light he and his friends did not get very far. They returned on September 13 with a homemade lantern, and after sliding down a tunnel found themselves in a large room that was about 100 feet long and 40 feet wide. This room turned into a narrow passage and, as they entered that passage, they raised their lamp and discovered that the walls of the cave were covered with fantastic pictures of animals.

The boys decided to tell their school teacher, Leon Laval, about their discovery, and soon word spread about the cave paintings of Lascaux.

By 1948, daily tours were being given of the cave paintings, but the human traffic increased the humidity and carbon dioxide levels inside the cave, which in turn resulted in damaging mold and fungus growing on the walls.

After determining that the 600 cave paintings and 1,400 etchings in the cave were about 17,000 years old, scientists closed the cave to the public in 1965.

A reproduction of the main parts of the cave was opened nearby in 1982, where it remains a tourist destination, while more reproductions of the paintings can be seen at the Centre of Prehistoric Art at Le Thot, France.

Some of the most distinctive pictures in the caves at Lascaux are pictures of primitive cattle, called Aurochs, and primitive horses that look very much like Tarpan (a type of primitive horse). Both Aurochs and Tarpan were "back bred" or recreated by Lutz Heck, who was also instrumental in the creation of the German Hunt Terrier (Jagdterrier or Jagd terrier). 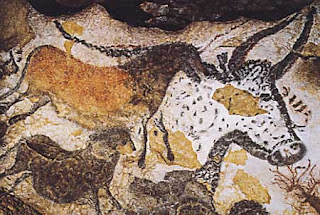 Email ThisBlogThis!Share to TwitterShare to FacebookShare to Pinterest
Labels: archeology

Wow, I never actually knew how the caves were discovered. To be honest, I never gave it much thought.

Thanks for the information and the well-deserved plug for terriers.

Nice post. Lascaux is a must visit for Paleolithic cave paintings. The basic designs consist of huge animals. You can see around 2000 figures in this cave. The figures are divided into animals, human beings and abstract things. The Great Hall of the Bulls is very famous. The painting of four huge bulls is amazing. The best time to visit this caves is between July and August. For more details refer The caves of lascaux

Nice post, Mr. Burns! I LOVE THESE PAINTINGS! I think that they are fascinating and very beautiful!

W. Herzog recently made a documentary film about European cave paintings from prehistory called "Cave of Forgotten Dreams." It was well done. You can get it from Netflix if you're interested.