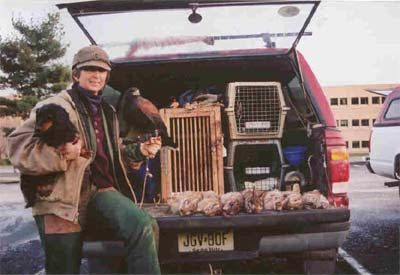 The miniature dachshund is an undervalued dog in the field, where its keen nose, small size, booming voice and ability to stay out of serious trouble make it invaluable when hunting week in and week out.

Teddy Moritz of Rockaway, N.J., is a real piece of work. I mean hard-core. And I mean it in the best possible way.

No Janie come lately, Moritz has been involved with falconry since 1966.

Married, with grown children, Moritz quit her various naturalist and Fish and Wildlife agency positions because work was interfering with her hunting.

"My husband is a saint," Moritz said of her active hunting schedule.

As if hawks are not enough work, Moritz became involved with miniature longhair dachshunds in 1976.
"Only the hunting kind," Moritz said quickly. "All my dogs have Field Champion titles and American Working Terrier Association Natural Hunting certificates."

While it is evident that her dog's titles and certificates are important, Moritz said pointedly, "The dogs have to satisfy my criteria."

Which, by watching the way her dogs work, appear high.

Moritz is also an American Kennel Club judge for field trials and earth-dog trials. Earth dogs are terriers and other dogs bred to enter underground dens, or burrows, to oust concealed wildlife.

Moritz's hunting clothes reveal a lot about her. The colors are muted, well worn and
tough.

She is soft-spoken in the field, as hunters should be. She has no false modesty and speaks highly of her dogs while they ably demonstrate the good qualities she conveys. Moritz is resolute and confident as she follows her small hounds with her Harris hawk. The day's events affirm her confidence.

The miniature longhair dachshunds Moritz breeds, trains and hunts are genuine, realistic hunting dogs. Though I generally have no use for very small dogs, these 7-to-10-pounders opened my eyes. I would guess their legs at six inches, maximum, but they move them, and keep moving them. They have a lot of heart.
Don't misunderstand me; these miniatures are not fast. But they are fast enough to push a rabbit from the brush, keep on its tail and keep it moving. That is all that is needed for either falconry or regular rabbit hunting.

While following Moritz's miniature hounds (remember, they weigh 7-10 pounds each) near an apartment complex, we rounded a corner of a woodlot and saw three boys, probably about fourth graders, running for their collective lives with about five miniature longhair dachshunds chasing them.
Moritz called her dogs and they broke off the chase, not that their little legs could ever catch the youngsters. It was the funniest thing I have ever seen while hunting.

The youngsters approached us, cautiously at first, to see the small dogs and found them not only harmless, but also lovable. We added three more (little) brush beaters to the group.

Moritz's hounds were black and tan, colored and marked very similarly to a Gordon setter. The dogs are cute little things and are definitely functional hunters.

Teddy Moritz and her miniature hounds added a great deal to our falconry experience. They made an already great day better.