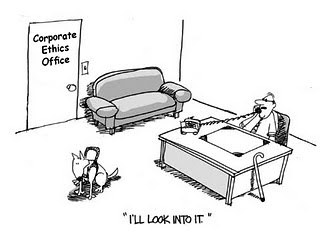 People always assume they will do the right thing, but in practice, that's often not true, as the Milgram Experiment made clear:

The most well-known example of this in academia is the experiment conducted by the Yale University psychologist Stanley Milgram in the early 1960s. In the experiment, participants were “teachers” and, unbeknown to the participants, the “learner” was really an actor. The teacher was to instruct the learner in word pairs. For every wrong answer, the teacher could shock the learner, increasing the intensity of the shock for each wrong answer.

In reality, there were no shocks (the teacher couldn’t see the learner), but the person administering the shocks didn’t know that. In fact, the learner would bang on the wall, supposedly in pain, as the shocks “increased.”

In the end, a majority of the “teachers” administered the strongest shock of 450 volts, and the experiment was replicated elsewhere with similar results. The findings are depressing — that ordinary people can be easily persuaded to do something they believe is wrong.

The amazing thing about wrongdoing is not that someone eventually speaks up, but how many hundreds of people can know about a crime and say nothing.

This is as true in the world of dogs as it is in the world of corporations, as I have noted in the past. The Kennel Club is little more than the Stanley Milgram Dog Show in which no one questions authority less they lose a ribbon or spark a whispering campaign about their breeding stock.

No incentives are attached to integrity, but a great deal of social and economic abuse is quite obviously associated with sticking your head about the ramparts.

Sure the occasional investigation is sparked, but so what?  Does anything really change in a closed culture of Big Winks, reciprocal back-scratching, and short attention spans?

And look at the proctors in this charade.

In the world of dogs, the people who make the decisions and who are supposed to be providing the oversight are breeders themselves.

Do you really expect the "health" person for the Neopolitan Mastiff club, the Shar Pei club, or the English Bulldog Club to push for a change in standards, less inbreeding, better judges, and less exaggeration?

The reason these people joined their breed club to begin with was to ingratiate themselves with "the fancy," not to challenge it!

Can a person who is initially drawn to a deformed, defective and diseased breed wake up and see the error or his or her ways and still hold an elected seat in a breed club?

Perhaps.  But if they speak up, they are doomed.
Breed clubs are like cults; you have to drink the koolaid and chant with the group enmasse, or you will be drummed out of the ranks.  If you hope to move up in the world of dogs, you cannot challenge the authority of the Kennel Club, you cannot point out that your "working" breed no longer works, and you cannot detail the depth of inbreeding caused by closing the gene pool with less than 50 dogs.