A Breathless Article on Lyme 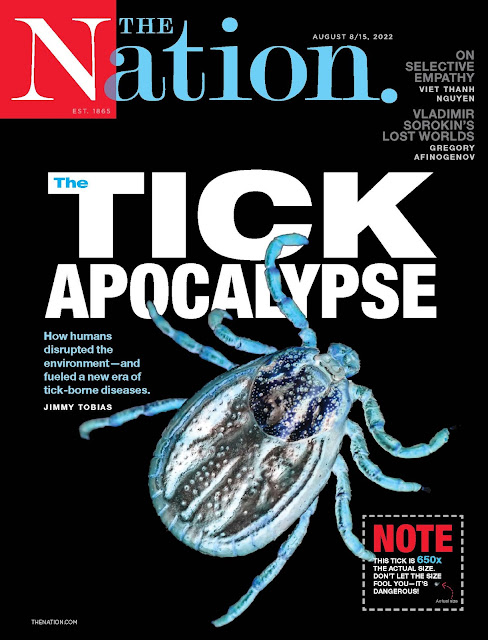 The Nation has a cover on Lyme Disease, which is weird unto itself, as The Nation is an unapologetically leftist publication devoted to politics and policy.
True to form, the article starts with a thesis which is that:

Lyme and other tick-borne pathogens have emerged from ecosystems that have been disturbed, fragmented, and fractured by intensive human development. Ballooning deer populations, second-growth forests, suburban and exurban growth, habitat degradation, predator eradication, wildlife extinction—these and other factors have set the stage for the surging presence of Lyme and its zoonotic cousins among us.

So Lyme Disease is caused by humans meddling with the environment?

As the article notes (buried a bit too deeply, I think):

[T]here is now plenty of evidence indicating that Borrelia burgdorferi has been on this continent in various forms for thousands of years (as it has been in Europe). According to a 2017 study in the journal Nature, Ecology, and Evolution in which scientists sequenced nearly 150 different Borrelia burgdorferi genomes, the bacteria are “ancient.” They have been evolving in North America for roughly 60,000 years and were historically widespread across the Northeast and Midwest.

OK.  So Lyme has been around the US longer than people have.  Huh.

So what horror have we humans done to fan the flames of Lyme disease?

Well, we have allowed the forest to regrow, which has produced nuts and seeds, which have provided food for white-footed deer mice, which are the zoonotic reservoir for Borrelia burgdorferi.

That's the cause of the "apocalypse" touted on the magazine cover.

Another horror: We stopped shooting every deer to the point that white tail deer were almost extinct in Virginia, the state they were named after.

Bastards causing all this... apocalypse.

Not noted:  Lyme disease is mostly asymptomatic in both people and dogs, and when symptoms do appear, the disease is generally cheap and easy to cure with common antibiotics.

Huh.  I guess that fact does not fit the "apocalypse" frame.

Also note noted: the deer population in the US is about what it was in pre-Columbian times, and the red fox population (the animal that most frequently preys on deer mice) is at record levels in the absence of wolves and mountain lions.

So what's going on with this article beyond the need to suggest humans are screwing up the environment?
Two things:
Bottom line:  If you really want a headline, even good news can be the herald of the apocalypse. Antibiotic and vaccines are keeping is healthy longer?  Social
Security is going to go bankrupt!  Interest rates are low?  Senior citizen coupon clippers are going to go broke!  Interest rates are high?  How will Generation Z ever afford a house?
And on it goes…

Asymptomatic infections are still infections and may be impacting the body without patients or doctors recognizing the impacts (hence asymptotic).

"The true prevalence of Lyme carditis is unknown, because most of these cases are clinically asymptomatic."