The Mathematics and Culture of Flood 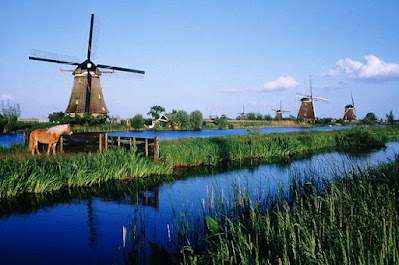 Germany, France, and England are being hammered by massive floods brought by atypical rain and exacerbated by built up flood plains and hard surface scapes that leave the water with few places to go.
One country conspicuously absent from massive damage is Holland, aka the Netherlands, one of the most densely populated countries in Europe.  And, as in so many things, therein lies a story.
The Roman historian Pliny noted that the people living in what is now Holland were "a miserable people living at the highest known level of the tides. They have built their huts and live like sailors when their land is covered-over, and like the shipwrecked when the tides have gone out."In short, even with a very small population, life in the Netherlands was pretty grim 2000 years ago.As the population of Holland grew, the need for land -- already in short supply -- increased. The Romans were the first to set about reclaiming arable land, and they did so by cutting canals and draining swamps. In the absence of family planning, however, the population of Holland continued to slowly grow, and by 1000 AD it had risen to well over 1 million and more aggressive land reclamation efforts were needed.Since Roman times, increasing numbers of people in Holland had been building earthen berms around their lands in order to help keep water out and speed the drying of otherwise marshy land. As increasing numbers of berms and dikes began to be linked to each other, the integrity of regional dike systems grew dependent upon each other. A "social contract" was needed, and it was soon created with neighboring farmers getting together to formally acknowledge their community dike-maintenance obligations.By the 12th Century every Dutch farmer was required to maintain his portion of a dike, and this obligation was enforced by elected "water guardians" headed by a "dike reeve" or Dike Lord who could levy fines and subject miscreants to physical branding. In extreme cases, the "Law of the Spade" was evoked, in which dike-maintenance scofflaws were required to put their spade in the ground and leave their own lands forever. Neighbors of the offending farmer would then appoint someone else to take over the land and maintain the dike that the previous owner had so studiously ignored.In short, the end result of a land shortage in the Netherlandswas the OPPOSITE of what you might expect in a resource-scarcity situation. Instead of a war over farm land, the shortage of terra firma forged a culture in which working together towards a common good was not only expected, it was required.In the absence of family planning, of course, the population of Holland continued to grow. By 1300, it had risen to about 2.2 million people and the demand for land was as high as ever. Around 1400 AD the first windmills showed up in Holland -- a new energy source that was quickly put to use pumping marshy land dry.Population growth did not stop, of course. The population that was 2.2 million in 1300 rose to 3.2 million by 1824 and then took off like a rocket as knowledge of basic hygiene resulted in a rapid decline in childhood mortality.Holland's population rose to 4.2 million by 1855, 5.2 million by 1872, 6.2 million by 1884, 7.2 million by 1894, 8.2 million by 1904, and 9.2 million by 1915.In 1921 the population of the Netherlands was 10.2 million and it continued to grow by leaps and bounds, hitting 11.2 million by 1929, 12.2 million by 1935, 13.2 million by 1942, 14.2 million by 1951, 15.2 million by 1963, 16.2 million by 1975, and 16.7 million by 2013.Of course, as Holland's population continued to grow, so too did its need for land. Colossal dikes, canals, barrages, dams, pumping mechanisms, storm surge barriers and locks were constructed to reclaim more and more land from inland lakes, bays and coastal flats. As these marshy areas were "put under the plow," millions of acres of bird habitat were lost.Today, more than half of Holland is composed of land wrestled from the sea, and more than three-quarters of its population lives on land that was once underwater at least part of the year.Holland's reclamation of farm land has been terribly expensive, of course, but it has (surprisingly) **not** been so expensive that it has harmed Holland's economic development. As Johan Van Vern, the "father" of Holland's enormous post-WWII Delta Plan, has noted,

"The whole of the Delta Works can be had for one year's army budget, a mere trifle in the state economy of centuries."

In fact, Holland's GNI is not only higher than average for Europe, it is also higher than average for Western Europe and Northern Europe.Nor has Holland's Delta Plan ever failed to hold back the sea. While the history of Netherlands is littered with stories of flood and ruin caused by dike failure, the history of the last 40 years is quite different thanks to modern engineering methods (concrete is a good thing) and much higher construction standards. Today Holland's dikes are required to be built to a "Delta Safe" standard capable of withstanding a storm of a magnitude that might occur only once in 10,000 years. The result of such massive construction is that no one under age 40 in Holland has ever seen a dike breached by the sea.The best news, of course, is that Holland has addressed its core underlying problem: rapid population growth.Thanks to modern contraception, the Netherlands now has a total fertility rate (TFR) of just 1.7, and its population is expected to grow by less than a million people over the next 50 years (most of it due to demographic momentum abetted by immigration).Another bit of good news, is that with Holland's dramatic slowing of population growth, the government has stopped building new dikes and has made the rather momentous decision to return some of its reclaimed land back to the sea.The current plan is for one tenth of all Dutch farmland to eventually be returned to marsh, wetland, or flood plain forest. An area of 600,000 acres of dry land is already in the process of being returning to seasonal or permanent flooding, and wild birds such as cormorants, spoonbills and marsh harriers are beginning to return to Holland after being driven from the land by drainage during the last Century.