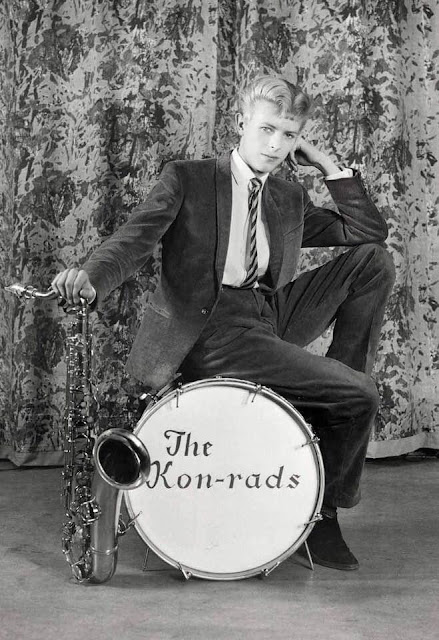 David Jones (aka Dave Jay, aka David Bowie), was the Kon-Rads’ vocalist and Saxman in 1963.
David Jones had to change his name because “Davy Jones” was already being used by the shortest member of The Monkees.
Bowie named himself after the American pioneer woodsman Jim Bowie of Bowie Knife and Alamo fame. It was an ill-informed choice.  The Alamo, after all, was about white American interlopers fighting to secede from Mexico in order to preserve slavery.  Mexico had banned slavery and liberated all in bondage, but white Texans were having none of it.  The Alamo” was, in fact, the first Confederate monument.
Texans seem to know next to nothing of their own state history, and yet it’s not deeply hidden. Terxas's own "declaration of the causes which impel the State of Texas to secede from the Federal Union" reads:

“Texas abandoned her separate national existenceq and consented to become one of the Confederated States to promote her welfare, insure domestic tranquility [sic] and secure more substantially the blessings of peace and liberty to her people. She was received into the confederacy with her own constitution, under the guarantee of the federal constitution and the compact of annexation, that she should enjoy these blessings. She was received as a commonwealth holding, maintaining and protecting the institution known as negro slavery--the servitude of the African to the white race within her limits--a relation that had existed from the first settlement of her wilderness by the white race, and which her people intended should exist in all future time. Her institutions and geographical position established the strongest ties between her and other slave-holding States of the confederacy.”

Texas was forged in the fires of white supremacy, and its Republican leadership is still dedicated to the cause.  “Remember the Alamo,” indeed!
Of course, young British want-to-be pop star David Jones knew none of this. Bowie was, in fact, the opposite of a bigot. He was not only sexually ambiguous, he was pan-racial and even pan-planet at times.  His decades-long love affair and marriage to the Somali model Iman was famous, as was his disdain for MTV which all but ignored non-white musicians.