Hybrid Ducks Are Common and Good 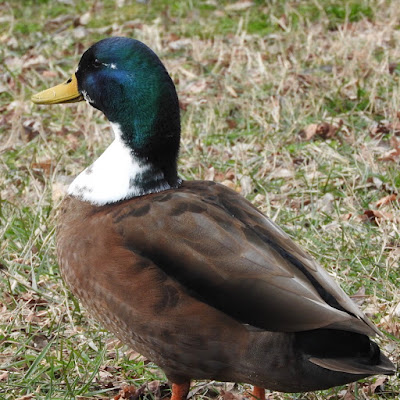 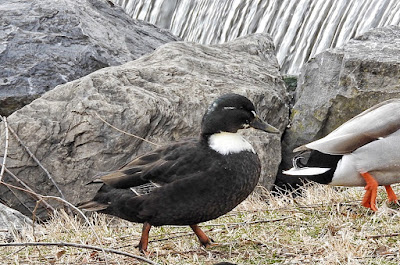 A few duck pictures from yesterday.

At top is a male "Bibbed Mallard," which is a Mallard hybrid created by crossing a wild Mallard with a feral domestic farm duck of some type. Mallards hybridize a lot. This fellow was hanging out with a mixed flock of geese and ducks at a local park.

At bottom is a male "Bibbed Black Duck," another natural hybrid made from crossing a Black Duck with a feral domestic farm duck of some other, unknown, breed.

Some time back I noted that hybrids in nature are actually quite common.

A question arises, in correspondence: Do different species really interbreed in the wild? And if they do interbreed on occasion, aren't they all sterile like the mules made by crossing donkeys to horses ?

The short answer is: Yes they do, and No they are are not all sterile. And, for the record, not all horses crossed with donkeys are sterile. Most are, but not all!

First, let me say that this point is basic to understanding biology: fertile hybrids occur, and they are critical to evolution.

This was a basic point of Darwin's Origin of Species and in subsequent works, such as the truly excellent The Beak of the Finch, whose authors spent 20 years on the Galapagos studying Darwin's finches.

The basic point here is that in the Galapagos the finches have not completely speciated, and the same is true for some of the Giant Tortoise and Iguana types on the Galapagos.

Even in those animals where we can say speciation has occurred under any definition, fertile crosses within genera are fairly commonplace.

On the Galapagos, each species of finch fills a distinct ecological niche for plant species, but the finches also cross-breed with some frequency which creates intermediate hybrids. Each type of bill (and there are more than a dozen types) is slightly more or less advantageous on each island, but due to the vagaries of weather (several years of drought in the Galapagos may be followed by several years of higher-than-average rainfall), no one beak is always right all the time, on some islands.

What this means is that while booming populations sometimes ride on the wave of the more extreme beaks and weather patterns, the core gene pool on which all variety on the Galapagos depends are the intermediates, which includes the crossbreeds or hybrids.

Because most hybrids are not genetically stable (i.e. a hybrid mated to a hybrid may produce offspring which look very different from their parents and each other), these hybrid birds are often the evolutionary watch spring which helps kick forward the next "population boom" of variety when weather patterns change for years on end.

What Darwin saw in the Galapagos was a perfect example of a common phenomenon.

In fact, hybrid animals are generally the fastest form of evolutionary advance and, as a consequence, hybrids occur all the time for the simple reason that a little "wobble" in the gene pool is always a good thing in a rapidly changing world beset, since the very beginning, by fire, flood, drought, tsunami, hurricane, global warming, global cooling, freak weather conditions, epidemics of disease, and wave after wave of invading "foreign" species.

Another point is that evolution is not something that happened "a long time ago" -- it is happening right now outside your door, and if you are really observant, you can even see it with your own eyes.

Look at your bird feeder, for example.

What the hell is that "little brown job" over there in the corner?

Yes, yes, it is a sparrow or finch of some type, but what type?

If you are really confused (and if you watch bird feeders long enough, you eventually will be), don't get too worried. You see, the bird you are looking at may be a bit confused too. It turns out that there are a lot of hybrid sparrows and finches out there, and most of them are fertile and quite a few breed.

Birds hybridize all the time. Ducks and geese are particularly proficient at it. Go to any major lake during duck migrations, and if you glass the water carefully, and for a long enough time, you will eventually see a free-ranging duck hybrid.

If you go "past the feathers" into the DNA of the birds, however, you will find that there are even more hybrids than at first meets the eye. A lot of duck species are not entirely "pure." Most Mallards, for example, seem to have a little Black Duck coursing through their veins, while in Europe the Ruddy Duck and the Whiteheaded Duck hybridize so frequently, that there is some danger pure Whiteheaded Ducks may be pushed into extinction.

In the bird-watching world, naturally occurring (and quite fertile) hybrids occur all the time between Spotted owls and Barred owls, as do crosses between Yellow-shafted and Red-shafted Flickers, and the various species of Amazon parrots.

Mammals hybridize less frequently than birds, but they too are not too hard to find.

Object lesson one is the Red Wolf, found right here in the eastern Unites States. Not only is this animal nothing more than a stable hybrid between the Gray Wolf and the Coyote, it is a very fertile animal.

What about other animals? They too hybridize on occasion. Lynx and Bobcat will naturally interbreed in the wild where their ranges overlap and the population of Lynx is low (as it always is in the U.S.). These Lynx X Bobcat hybrids are fertile, and have been found from Maine to Minnesota, and confirmed by DNA analysis.

In Europe, hybrids between feral cats and European Wild Cats are so common that it is now very hard to find a pure European Wild Cat at all outside of an island sanctuary in the Outer Hebrides.

Even larger animals will hybridize on rare occasions. In 2006, for example, an American hunter in Canada shot what he thought was a Polar Bear, but upon close examination it was found to have brown splotches on its coat and a hump on its back, suggesting it was a Grizzly. DNA tests, however, confirmed that the animal was a naturally occurring Grizzly Bear-Polar Bear hybrid. Pairings of these animals have been done at zoos, and they have all been quite fertile.

Buffalo will naturally hybridize with cattle, and in fact they have done so for such a long time that there are not too many 100% pure buffalo around anymore.

Mule deer and Whitetail deer will naturally hybridize on occasion, though apparently the animals that come about from this union have erratic escape behavior patterns, which make them susceptible to predation.

What about fish? There are too many hybrid fish types to mention, but suffice it to say that trout, salmon and many other types of fish will naturally hybridize, as will some insects (such as butterflies and fruit flies).

In the world of reptiles, we find naturally occurring hybrids occurring between American Alligators and Cuban Caymans to the point that pure Cuban Caymans are getting harder to find.

And, of course, in the plant world hybrids are a dime a dozen, and include not only most of the plants we eat, and a very large number in the garden, but increasing numbers of plants found in our forests and fields as well (many are escapees from the garden, it should be said).

You will note that I have not even mentioned "prison romance marriages" where animals are kept in cages for long periods of time. If this is done, all kinds of hybrids are possible, and though most are sterile, fertile offspring between many types seems to be possible, and between some types it is the rule. For example, a hybrid cross between a male leopard and a female jaguar is called a Jagulep or Lepjag and they are always fertile. This hybrid animal, for the record, was once crossed with a male lion, and the progeny was displayed as a "Congolese Spotted Lion." The mind reels.

The bottom line: YES, hybrids DO occur in wild nature, and YES many of those hybrids are quite fertile.

So what happens to these fertile hybrids? Not all of them mate. It turns out (surprise!) that the ability to mate is not the same as actually doing so, and that many hybrids have inappropriate or awkward courtship displays.

Think computer geeks at a Star Trek convention, and you get the right idea.

So far as I can tell, however, most fertile hybrids do eventually mate with one side of their gene pool or another. For example, a Lynx-Bobcat hybrid is very like to mate with a Bobcat, further diluting the Lynx infusion and reverting the progeny, very quickly, back to type. No doubt this "infusion-pollution-dilution" of genes has been going on with birds and fish since the beginning.

Hybrids are, of course, statistically rare. When animals are in abundance, most species mate with their own kind.

That said, there are a lot of duck hybrids if for no other reason than than there are a hundreds of millions of ducks flying all over the world.

And what about Mules? Well almost all mules (Donkey X Horse) and Hinnies (Horse X Donkey) are sterile, but at least a very, very few females are not. So even here, where the number of chromosomes between species is not even the same, we find the "rules of nature" being broken, and the wobble of genetic possibilities being preserved.

Bottom line: species boundaries are MESSY. You left out the bit about Neanderthal genes in H. sapiens. If you include F10^4+ hybrids, I wouldn't be surprised if there were more hybrids than pure "species" .

Enjoyed reading above article. The three keys to science...observe, observe, and did I mention observation? Interpretation and conclusions will naturally flow in an unforced manner. Like you said, hard and fast rules in nature...very few, if they exist at all.

I often stop-by a taxidermist/rancher/hunter whose shop is out where many of the animals he mounts are found. No better source of information about his slice of the world. For the uninitiated, confusion between lynx and bobcat is common. He has both (among other wild game) mounted on display. Markings, tufts on ears, heads are very similar. Taxidermist says in E. WA that bobcats are usually larger in size, and close look will reveal that the lynx is a strange looking cat, having large legs and paws for walking on snow, and a back line that slopes forward. Whether they interbreed in this area, I do not know. -- TEC