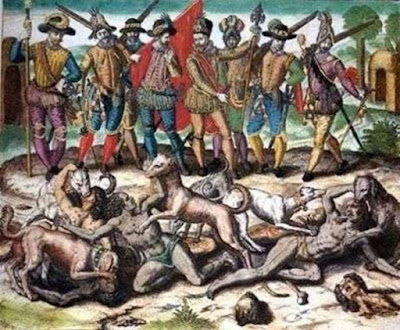 I live just upstream of the area the Dogue Indians used to inhabit on the shores of the Potomac River at Mount Vernon, Virginia.

I mention this as we celebrated Columbus Day just last week.

Columbus Day is a rather absurd holiday, as there is no day to commemorate the native people who lived in this country for thousands of years before we invaded and killed them off, sometimes intentionally, and sometimes unintentionally by disease.

As for Columbus, he is best understand as a war criminal and mass murderer who killed and plundering for gold and ego.

Over at The Huffington Post, Eric Kassum reminds us of why Columbus brought the first European dogs to the New World -- Alaunts used to terrorize, kill, and feed on the native people.

On his second trip to the New World, Columbus brought cannons and attack dogs. If a native resisted slavery, he would cut off a nose or an ear. If slaves tried to escape, Columbus had them burned alive. Other times, he sent attack dogs to hunt them down, and the dogs would tear off the arms and legs of the screaming natives while they were still alive. If the Spaniards ran short of meat to feed the dogs, Arawak babies were killed for dog food.

Columbus’ acts of cruelty were so unspeakable and so legendary - even in his own day - that Governor Francisco De Bobadilla arrested Columbus and his two brothers, slapped them into chains, and shipped them off to Spain to answer for their crimes against the Arawaks. But the King and Queen of Spain, their treasury filling up with gold, pardoned Columbus and let him go free.