Winking at Abuse in Church and at the Kennel Club 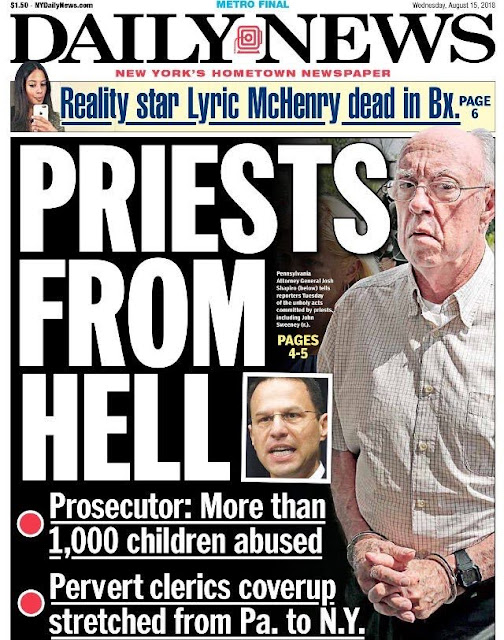 The picture, above, is from today's New York Daily News.  The New York Times informs us that that over 300 priests have been positively identified as molesting over a 1,000 children in just four (just four!) Pennsylvania diocese.

Pedophilia in the Catholic Church is global and endemic.

It is not an aberration, but a known feature.

Over on Facebook someone wonders: "How can a person get a calling to be a priest and do these sorts of things to young boys? That is just horrendous. I defies my thinking."

My answer was blunt: "It’s a simple job with boy-f**king benefits. Everyone knows it, which is why boy f**kers join the priesthood."

In short, pedophilia is not an accidental defect of the priesthood, but a known outcome of the celibacy orthodoxy that the hierarchy has decided to maintain knowing full well what it will lead to.

What's this have to do with dogs? A little bit, I would argue.

Back in 2011 I wrote a column for Dogs Today in which I compared folks who are Kennel Club breeders and show dog aficionados to people who tell us they are Catholic. It raises a few... questions.

[H]ow about if we treat everyone who owns a Kennel Club dog a bit like someone who announces they are Catholic?

You are Catholic, eh?

There is a pause. Both sides know what is being thought; now the only question is whether it will actually be said.

“What are your thoughts on the pedophilia?” you might ask. “Have you thought about changing churches, especially now that you have children?

How rude, some may say.

You think it rude to ask how -- in a world where there are a thousand ways to salute God -- someone would choose to stand shoulder-to-shoulder with a church hierarchy that winks at child buggery and has shied away from naming the problem and finding solutions for hundreds of years?

I guess we differ there!

But is it any different in the world of dogs?

When pressed about the physical abuse and pain heaped on dogs by extreme standards, and the systematic inbreeding of dogs within a closed registry system, the Kennel Club is quick to blame “the Victorians.” There is little they can do to change things quickly, they explain. It will take time. Reform will be slow. But good news; they have created an advisory committee of show dog breeders to point the way forward!

Right. And the Vatican has also put the question of what to do about pederasty to a group of celibate old men who think it perfectly fine to wear dresses to the office.

What? You are making a parallel between the Kennel Club and the Vatican? That’s outrageous!

Really? Which side have I offended?

And, of course the parallels go on.

When asked about pedophilia, the Catholic Church routinely claims such problems are quite localized. Yes, Saint Anthony’s church had “that problem,” but the Church is in “this world” and “not immune” from “such things.”

Now we know the truth: child buggery in the Catholic Church is a global problem and has gone on for centuries.

That man is now the Pope.

But again, is any of this different from what we see at the Kennel Club?

These problems are not confined to one breed or one country, but cut across many breeds and many countries.

Why, none other than an unbroken phalanx of show dog breeders!

I think a Pennsylvania grand jury just answered part of that question, while the dog-buying public is answering the second part by marching with their feet and their wallet away from the Kennel Club. You can love dogs, and God, and hate the institutions that defile or deform them. In fact, you absolutely must.