What do you do for a living, I asked a neighbor.

Well, that was not quite the whole story was it? My former neighbor (and sometime assistant baseball coach for my son's team) was the Assistant Attorney General of the United States.
But if you are smart, you do not high hat.

The fellow who lived across the street used to be head of the CIA and also Secretary of Energy. He would not tell you that if you met him. Everyone is someone. Big deal.

I mention this because I noticed a string of letters after someone's name.

The big deal here, I supposed was the MSc.

A masters degree in some sort of science thing.

I have one of those too, but I have never put those letters after my name. Imagine!

Can you imagine having an online conversation with Jimmy Wales, Danny Hillis, or Ray Kurzweil and putting that in your signature block!

It's a bit like the story of the old man who died in the Johnstown Flood and who, when he got to heaven, was asked to speak a few words after dinner. He said he would tell the story of the Great Flood.

"Fine," said St. Peter. "But just remember that Noah will be in the audience."

So what does this have to do with dogs?

You see, we see a lot of this "credentialism" in the world of dogs where correspondence school courses are waived about as if the paper is a substitute for 30 or 40 years of hands-on experience.

It's a bit like canine pedigree papers -- the stuff of pretenders.

It's the same with dogs.

If the dog can hunt, nonsense paper is not needed.

And if it can't hunt, then nonsense paper is also not needed.

The paper is the pretension behind the pretender, and that is generally true whether it is dog, man, or woman.

I am not saying the paper is worthless -- I'm saying that waving the pedigree around just before the tail gate drops on the truck is always the start of a wonderful joke to be told for many years in hunting camp.

And what of these degrees this person has trotted out?

I have no idea, but I am told the FRSA letters are pure nonsense. It means the person is a "Fellow" in the "Royal Society for the encouragement of Arts" which is a pretty prissy-sounding thing right off the start. As their web site tells you, the FRSA designation is "open to anyone anywhere in the world who shares or demonstrates a commitment to positive social change in their professional, civic or personal life." All you have to do is fill out a few forms and slap a stamp on it -- and, of course, send them £187 a year (plus a “one-off registration fee of £75 to help cover the set-up and on-boarding of your Fellowship”).

It's about like buying a degree from Universal Ministries, but with fewer choices.
Imagine putting that in your signature line! 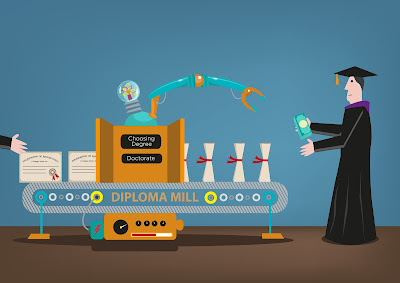