Before They Were Called Dog Crates 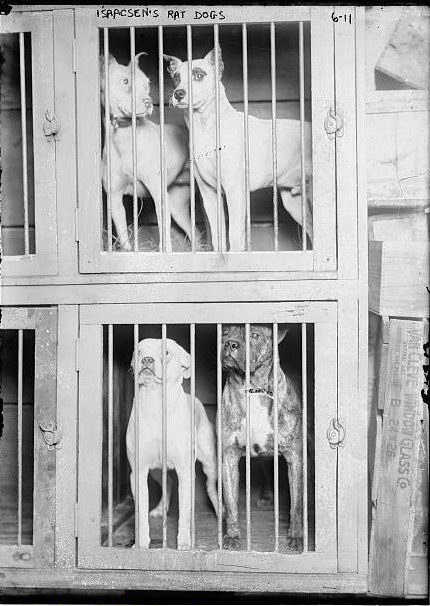 Somewhere around the turn of the century, a gentile version was made and sold as a "snuggery" for lap dogs -- the first "sherpa bag". 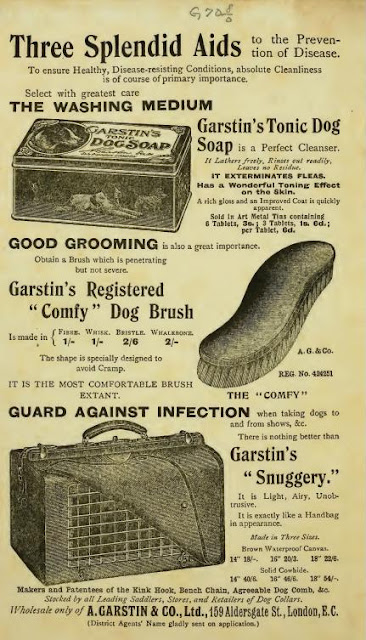 In the 1940s and 50's, production wooden boxes were produced for airline travel using a new material -- plywood.
. 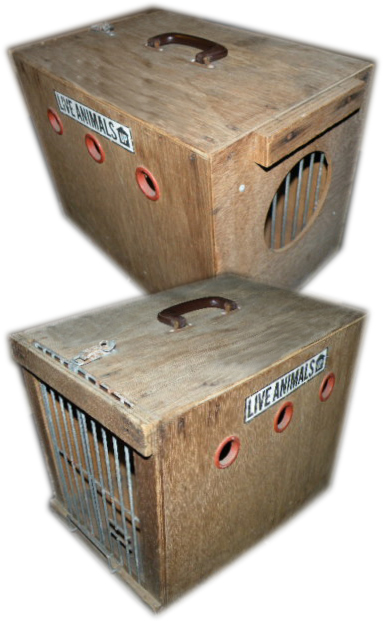 Then in the 1970s, the airlines began selling fiberglass (not plastic) "Sky Kennels" produced by Doskocil (now called Petmate) which could only be bought directly from the airlines (they were not sold in stores or by mail).  Sky kennels were produced through the 1980s until they were replaced by injection-molded plastic crates.

Today's injected-molded crates made by Sky Kennel or Vari Kennel are now lighter, sturdier, and more secure than previous models, and have become the backbone of not only pet travel, but night time pet containment.
.

I used to have a Doberman-sized plywood crate just like the lower one in the picture. It was light and my dog loved to hang out in it. But I had to partially dismantle it to get the grate off. Then tapped it back together.

Have you seen the fancy-schmancy wire crates woven with plastic pseudo-rattan? Or the hardwood designer crates that sell for hundreds of dollars?

Pity the trains won't take dogs in baggage anymore. I'd much rather my dog traveled by rail than by air. Then I could go along and visit her at stops. Days gone by...

Where did you come across the first photo? Obviously the "Isaacsen's Rat Dogs" written on top perked my interest. The two in the top kennel do look like fiests - a pre-curser to the Rat Terrier.

If you google "Isaacsen's rat dogs" you will find the picture is all over, but a print can be ordered from here >> http://prints.encore-editions.com/0/500/isaacsen-s-rat-dogs-in-cage.jpg

The term "feist" was first used by George Washington, I am told. Not sure that's true, but ratting dogs are older the Jesus. The dogs on the bottom seem to be pure old-school staffies, while the ones on top I would rate as staffie-jack russell crosses. Dogs used in the ratting pits were matched by size, so you competed with dogs of equal weight against a clock with 10 or 20 or more rats in a pit. The crappy pits were square and wood, the better ones round and cement or metal. There were variations with rats under flower pots, etc.

Oh, cool - found out it is part of the Bains Collection in the Library of Congress, and they have a high-quality I can download and print myself.

Unfortunately, there is no date nor are their notes, but could have been taken anywhere from 1900-1925.

really love that photo--
those dogs on the top look like the original bull and terrier crosses, now called staffies and pitties. they were a good deal smaller than what is bred now; 30-35 pounds was average.
the ones on the bottom look more bully to me if i am perceiving correctly, having that defective brachycephalic face that wasn't common in bull&terrier crosses back then.

The plywood crate didn't die. When I flew my dogs from Australia to the US in 2009, the transporter (JetPets) used plywood crates. Heavy, but they did the job.