Who Put the Border in the Collie & the Terrier?


Who put the border in Border Collie?

Who put the border in Border Terrier?

The border in question, of course is the border between Scotland and England and is, to put a finer point on it, the Cheviot Hills.

I have detailed, in an earlier post, the origin of both the Border Terrier and the Patterdale Terrier which is descended from the "blue" or "blue-black" versions of the Border.

But what about the Border Collie?

The term "Border Collie" is not as old as some imagine, and appears to have become popular around 1900 to differentiate it from the non-working or pet collies that began appearing at about that time (though the term is older, it was not in common use before about 1900).

The world is a small and inbred place, and perhaps nowhere more so than in the border area of Scotland where the population is not thick, and the names tend to swim together.  Consider the Cheviot Sheep prize-winners list, below, from The Farmer's Magazine (July-December) of 1850. 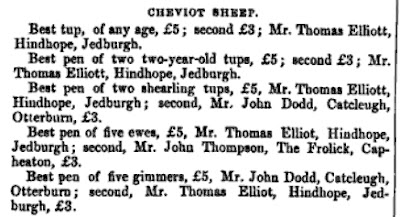 Look carefully at the names. If you are very familiar with the true history of the Border Collie and the Border Terrier, two names will jump out at you from the swirling ink.

Yes indeed, that is Thomas Elliott, Hindhope, Jedburgh, listed with John Dodd of Catcleugh one the 1857 founders of the Border Hunt!

Who is Thomas Elliott, and how does he factor into the development of the Border Collie?

Well quite directly.  You see, it was Thomas Elliott who supplied Queen Victoria with her much-loved dog, Noble, through the Duke of Roxburghe at Floors Castle, for whom he managed stock.

Noble was given to Queen Victoria when the dog was about one year old, and he lived with her as her favorite dog for more than 15 years, passing away at Balmoral on September 18, 1887 at aged 16.  It should be noted that this was not the first herding dog for Queen Victoria -- "Sharp," who looked very similar to Noble, was with her from 1866 to 1879.  That said, it was Noble that catapulted the "Collie" onto the front page of the dog world, as it was Queen Victoria's most loved dog the year that the Kennel Club was founded (1873), and for the next 14 years, as the Kennel Club developed.

John Elliot, William Elliott's son, was born in 1858 and he went on to become a famous breeder and supplier of Cheviot sheep in his own right.

Here too we find the laced roots of Border Terriers and Border Collies in the form of this page of prize postings from Transactions of the Highland and Agricultural Society of Scotland (1894):

The John Robson listed here, of course, is none other than the famous Border Hunt man whose son, Jacob Robson, helped shepherd (pun intended) the Border Terrier into the ranks of the Kennel Club. 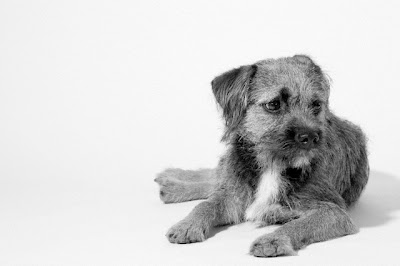 How else would a man be good at breeding and training sheepdogs unless he knew sheep?

I'm told the "new work" of border collies is Frisbee and fly ball, and that the AKC dogs are just as good at that as any, and if you don't think those people are experts at breeding border collies, then by God you have not asked them! ;)

I'm sure it's a steep learning curve to "know" Frisbees and balls & jumps.

Frisbee and flyball maybe, but most certainly agility is the "new work" of many BCs. And that's not a bad addition to the skill set, IMO.

Agility at the highest levels is physically demanding of dog and owner, requires extreme athleticism from both (at the large dog level, not always the small), and also takes years of training as well as a very tight bond between dog and handler. It requires all those things, including a dedication of lots of time, which is why former Olympian Greg Louganis was doing well, but not *great* with his dogs a few years back -- he didn't have the *time* to dedicate to agility.

While top-level agility may not be traditional herding work, it's pretty near a full-time job for the top dogs, and seems to reward the right things: Well-built dogs who can stay sound week after week, who learn, listen and adapt to changing environments at top speed.

At Crufts (I know) this year they had a new category in the flyball. The "ABC Category"!

ABC standing for Anything But Collies.