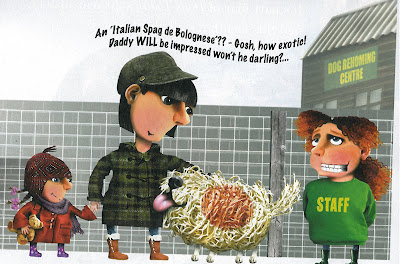 Art by Kevin Brockbank - click to enlarge.
I am going to blow the whistle on The Kennel Club.  You see, I have checked around, and none of The Kennel Club Rhodesian Ridgebacks are actually hunting lions. None of the Portuguese Water Dogs are actually herding fish into nets as some claim they once did.  The Irish Wolfhounds are not racing down Irish wolves – or even Minnesota wolves, for that matter.

The Kennel Club Fox Terriers are not found in the hunt field chasing fox down holes. Nova Scotia Duck Tolling Retrievers do not actually dance at pond-side in order to hypnotize ducks into coming closer to the guns.  The English Bulldog can barely walk or breathe, much less grab a bull by the nose.

Put your money down, and as early as 1850, almost anyone could buy an exotic-looking dog with storied past and rare abilities.  And what was the harm?  After all, no one who actually had a hill covered with sheep was going to Crufts to buy a Puli, Komondor or “Barbie” Collie to tend to their flock.

Kennel Club shows were for pretenders, and everyone knew it, right from the start. So what did it matter if these people bought freaks, fakes and frauds? And, of course, it didn’t!

And so the Neapolitan Mastiff was trotted out as an ancient breed descended from Roman guarding dogs, and never mind if the breed was actually cocked up after World War II by an Italian novelist.  Did it matter that no military or police force, anywhere in the world, actually used this dog to guard anything? Not at all! This was a dog for fantasy, not for function, same as the Shar-Pei paraded around the ring as a fighting dog, and the Chow Chow exhibited as a dog that was designed to be eaten.

So what’s the problem?  None at all!  I am not going to go off on a long harangue about the abysmal heath of Kennel Club dogs.  Nor am I going to bemoan the ruin of breed after breed of working dog pulled on to The Kennel Club’s roles. Those of us who actually work our dogs know what types work and where to get them. No problem there!

No, I am going to raise a different problem and offer a new (and fun!) solution.

The problem is what to do with the scores of thousands of shelter dogs that lie forlorn in small metal cages waiting for someone (anyone!) to take them home to make them a pet for life.


These dogs are, on the whole, healthier than their Kennel Club counterparts, and will do everything a Kennel Club dog will ever do in the average home – return a ball, bark at an intruder, cuddle up on the couch, scarf down food that hits the kitchen floor, and even learn a trick or two, provided someone will take the time to teach them.


A Pup With Provenance

Provenance is simply a story.   If I show you a battered old straw hat, you might not think it much. But if I tell you that this same hat was once owned by Isaac Bashevis Singer, winner of the Nobel Prize for Literature, then it’s something entirely different, and quite remarkable.  Now the hat has provenance! Instead of being tossed into the trash, this old, yellow hat will be put on a shelf and pointed out to any guest that comes over.

And so it is with dogs.

A “slightly used” cross-bred dog at the pound is a never-mind, but give that animal a decent story, and attach a few fake credentials to it, and suddenly you have a star and a conversation piece!

Ask any decent forger or old-time dog dealer, and they will tell you that the trick to selling a fake provenance is to build on a few small bits of obscure history, always adding a little specificity, but never making the story too over-the-top.

For example, suppose you have a slightly odd-looking terrier cross with prick ears?   Perfect.

You can say the dog is a “Scarlett Point Terrier,” named after the Scarlett Point Radar Station on the Isle of Man where they were first bred during World War II.

It seems that when the Chain Home radar stations were first being built around 1939, it was not always easy for the operators to tell the difference between an airplane and a flock or birds. At the Scarlett Point Radar Station, however, there was a young radio operator who noticed that his terrier would sit up and cock his head at about the same time an airplane first appeared on scope. The dog never paid any mind if it was a flock of birds, however. Clearly the dog could hear the airplanes from a great distance! Well, after that all, small prick-eared terriers where acquired and used at all the radar stations ringing Britain. After the war, a few old radar operators bred the dogs and kept the breed alive into the 1970s. The dogs have almost disappeared now, of course, but there are still a very about and, by God, we happen to have one here! A miracle.

Of course to really sell a story like this, you need few documents to support the claim. The good news is that a printed certificate or two from the old “Scarlett Point Terrier Association” can be easily printed out on a computer, with an old manual typewriter used to fill out the form and give it all an air of 1960s authenticity.

A fake provenance, of course, can be cocked up for any dog. And there’s absolutely nothing wrong with it, is there? No, of course not! After all, The Kennel Club’s been doing it since the beginning.

So let’s get on with it. Is the dog in question a Staffie cross? Ah well, it’s not a local Staffie cross is it?  No, this is a Portuguese Vinho do Cão, raised for hundreds of years in Portugal and Spain to guard wine cellars on farms, ships and restaurants. The Irish Staffie is actually descended from these dogs, which first washed up in Eire after the defeat of the Spanish Armada in 1588.

You have a long-coated shepherd of pedigree unknown? It’s actually a Chien de Couvertur, once used to bust cattle and pigs out of the thick hedgrows of Normandy. The dog was all but lost after Operation Overlord in 1945, but a pair of dogs was embraced as a division mascot by troops landing at Sword Beach. These dogs were later bred by Lord Chancelberry (then Lieutenant Chancelberry) at Falmouth Estate, and the dog you see before you now is descended from those two original dogs. It’s only available now only because a former gardener at the Falmouth Estate has fallen terribly ill.

And so it goes.

If a shelter really wants to move dogs, this is the time-tested way to do it. Just ask James Hinks who in 1850 cocked up a fake dog and a fake history and called it the Bull Terrier.

Just ask František Horák who simply crossed two non-working terrier breeds, and proclaimed the strange-looking, over-large, and soft-coated dog that came out the other end a perfect worker – the Cesky Terrier. Of course, no one has worked once since!

But a caution…. Whatever you do, when crafting your dog-dealer story, be sure to hold a back a little. Do not go too far over the top.   Yes a few gullible people may swallow a fable about diving dogs that herd fish into nets, and dancing mongrels that hypnotize ducks, but it’s best not to dress up a lie too much! Some stories are simply too ridiculous to believe!
From the March Issue of Dogs Today.

I'm going to run this down to the local shelter and see what kinds of wonderful dogs live there! I'm sure there's some. Maybe there's a chiweenie that needs a story or that nondescript spaniel. I know we have a lot of Black Texas Guard Dogs who's ancestors were at the Alamo with Jim Bowie. They must have guarded the women who were pardoned. Yeah, That's the ticket!!

Debi and the TX JRTs.

Amen! Thank you for reminding everyone that a dog's value is in what it can DO, not in how much "status" an owner can claim based on a meaningless piece of paper that proves only how superficial the human is. Want status? Get a fancy car. Want a good dog? Look for a healthy, sturdy one who displays his abilities for himself and doesn't give a rat's a** about your stupid piece of paper.

O.K., WTH is this dog on the cover? Ordinary Pud, or something even worse?

A 'pudin -- misshaped body, too short legs, ears akimbo. This dog is a bit of a mess. A lot of people find achondroplasia cute, but in fact it's a pretty serious health issue.

Is the breed history of the Canaan dog fake?

The history is that it is a breed of pariah dog found in the Middle East and it not too differentiated from pariah dogs found the world over. Someone slapped a name on these dogs in the 1930s when the Israeli's were looking to establish an identity. No fakery -- just not much of a "breed".