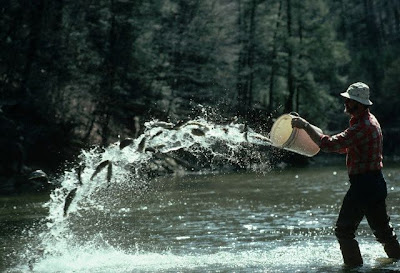 Hatchery trout being restocked in Pennsylvania.

It turns out that it's not just dogs, cows and chickens that suffer deficiencies when inbred. So too do fish. As Scientific American reports:

Plummeting numbers of several salmon and trout species have conservationists looking more and more to hatcheries — where fish are reared in comfortable captivity and then released into natural bodies of water. But this strategy may hurt wild populations, according to a paper published this week in Biology Letters.

Researchers at Oregon State University (O.S.U.) found that not only do hatchery-raised steelhead—a Pacific trout sharing the same genus, Oncorhynchus, as salmon—produce relatively fewer and weaker offspring once back in a natural environment, but so do their wild-born spawn....

....Araki and his colleagues looked at the Hood River steelhead supplementation program in Oregon and found that trout fry raised by two hatchery-reared parents had just 37 percent of the reproductive success of those with two wild-born parents, even though both sets of offspring were born in wild waters. If the fry had a mix of one wild and one hatchery-raised parent, then it had 87 percent of a pure-bred wild fry’s reproductive fitness.

Scientists are studying the issue, and are not certain the cause for the decline in fecundity, but inbreeding depression in hatchery stock is strongly suspected.
.

Email ThisBlogThis!Share to TwitterShare to FacebookShare to Pinterest
Labels: inbreeding

Now that's really interesting. Mankind has been horrible in his management of fish stocks. We're trying to do better, but in most fish species, they are fewer in number and smaller in size than they originally were.

These issues that are arising from inbreeding hatchery fish are just the latest in some of the poor management decisions I've seen dealing with these fish. My own state would rather allow for more acid mine drainage than protect trout streams, even though the state fish is the brook trout.

What's called a steelhead is called a "rainbow trout" over here. The steelhead is just the version that goes into the ocean to mature and then returns to spawn in a classical spawning migration back to the natal spring.

And rainbow trout also come in a golden coloration-- developed first in West Virginia. It's a hatchery fish derived from a single aberrant fish that appeared in a hatchery. All rainbow golden trout descend from that individual. There is an "in between" color that pops up when the normal rainbow breeds with the golden, which is called a palomino.

I've caught quite a few golden rainbows. I prefer rainbow trout to brown and brook trout as table fare. But it's a species of the Pacific coast. The brown is a Eurasian species. The brook trout is the only native.

I'm not really familiar with management trends but it sure seems we have more management failures than successes. Is there anything to be said about reducing the amount of management and see what nature does to correct itself? Maybe I'm being naive.

What needs to be managed, with rare exception, is not the reproductive habits of the animals, but the habitat in which they live.

If we take care of the habitat by protecting it from the most rapacious kinds of capitalism, the wildlife will take care of itself. Mother Nature is as tough as an old boot, and if we will only stop standing on her neck, she will generally spring back up and come back to life.

Management, of course, also means limits on take. In a world of ever-increasing numbers of people and declining numbers of wild places and clean streams, the only way we can have open fishing is if we have a lot of catch and release. The same goes for hunting of course -- there have to be seasonal and numerical limits on most things. But if we take care of habitat, those limits need not be onerous.

The one place where some active management of wildlife reproduction is needed is when animals become very rare and habitat is very fragmented. Then we may need to step in to breed, reintroduce, and cross-pollinate with new genetic material.

You are 100% right that normally, however, Mother Nature takes care of that kind of stuff on her own, provided we take care of habitat and fence in with hunting seasons and bag limits.