What Is a Terrier? 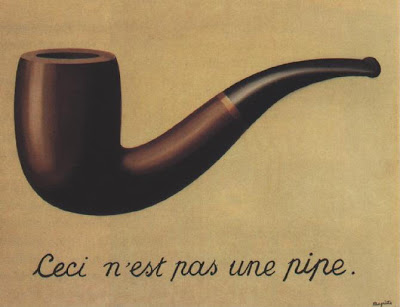 This is not a pipe. It's a painting.


President Lincoln was not much for hiding behind language or engaging in obfuscation, and he would sometime pose a riddle to new staffers to underscore the point.

I tell this tale, because it is more than a little germane when it comes to the taxonomy of dogs.

If I point to a cross between a Dachshund and a Corgi, and proclaim it to be a "Shenandoah Mountain Setter," does that make it a bird dog?

If I pick up a Border Collie at the shelter and insist on calling it a "Black and White Swan," does that make it a bird?

And yet, there seems to be confusion among some people in the dog world, who think words mean nothing. Words do mean something. Take, for example, the word terrier.

According to the Oxford English Dictionary and Etymology Online, this is the origin and meaning of the term:

A terrier is a small dog that goes to earth and which pursues its quarry -- foxes, badger, etc. -- into their burrows.

I could not have said it better, though I might have given a bit more history.

For example, I might have detailed the fact that Dame Juliana Berners, writing in the Boke of St. Albans (1496) noted that there were 14 basic types of dogs:


Later, in 1576, John Keys (who wrote under the Latinized name Johannes Caius) divided the world of dogs into five broad categories. Under the first group type, the Venatici, or dogs used to hunt beasts, could be found:


In an entirely different group (his fourth category), Caius noted that were various kinds of herding and guard dogs.


Canis pastoralis, or the Shepherd's Dogge; The Mastive, or Bandogge, called Canis Villaticus Or Carbenarius, which hath sundry names derived from sundry circumstances.


Prior to the 19th Century, there were very few "breeds" of dogs; most were just types.

This seems to be a point of confusion for some people who are a bit shaky as to what constitutes a "breed" versus a "type."

The Oxford English Dictionary says a breed is "a line of descendants perpetuating particular hereditary qualities."

In the modern world, it is generally deemed to be an animal that "breeds true" for at least seven generations.

But what does it mean to "breed true?"

Good people can, and do disagree. The American Kennel Club, for example, splits breeds that other registries and countries lump together, and vice versa.

The good news is that the real experts -- the people who actually work their dogs on a regular basis rather than merely parade them around at the end of a string leash, are not too often confused.

A genuine terrierman knows what a true terrier is, just as a running dog man knows what a true sighthound is. And as for the houndsman, he will tell you a good dog is never the wrong color, and the same can be said of those who herd sheep for a living, or depend on dogs to carry them over 200 miles of open arctic snow and ice.

But, of course, these people are in the minority today, aren't they?

Instead of people who engage in honest work with types of dogs, we now have show ring theoreticians who are obsessed with breeds of dogs.

For them, a dog is not what it does, it is whatever the piece of paper says, and that piece of paper is all wrapped up in a romantic history cocked up years ago by an all-breed book writer penning paragraphs about a dog he never owned and never worked.

As a result, we have complete and total nonsense in the world of canine taxonomy.

Take the issue of terriers, for example.

Despite what some folks would have you believe, a "terrier" is not a universal catch-phrase that can be properly tagged to any type of scruffy-looking or game-bred dog. It is a dog that goes to ground.

A 60-pound hound is not a terrier.

That would seem to be simple and obvious enough, but for some folks it is not. And so, in the topsy-turvy world of the early dog show world, a few odd-looking Otterhounds were once crossed with a working terrier and then called the "Bingley" or "Waterside" terrier, and then later renamed the "Aierdale" terrier.

But can a dog that is almost entirely hound, and which weighs 60 pounds be called a true terrier? Only if you would call a transvestite a woman!

An Aierdale is a hound in form, and it does a hound's work in the field when it is worked. A houndsman knows it is a hound, for it is found in his kennels, and not that of the terrierman.

Aierdales, in turn, were crossed with a herding breed (the Giant Schnauzer) and a molosser breed (the Rottweiler) and a few herding and guard dogs (Caucasian Ovcharkas and Eastern European Shepherds). The resulting cross was called a "Black Russian Terrier," despite the fact that there is no terrier in the breed at all.

Once again, you can call the dog whatever you want, but calling it so does not make it true. A Black Russian Terrier is not a terrier in any way, shape or form.

And then, of course, we have the Bull Terrier which is neither true terrier nor true molosser. It is, instead, the most common type of dog on earth today: the dog dealer's dog. This is an animal cocked up for the pet trade, and for no other purpose than to trot around the ring and lie next to the chair.

To be clear, there is nothing wrong with a dog being created solely for the purpose of being a pet. That is the work of most dogs, and it is the purpose to which most terrier breeds have devolved. But let's not kid ourselves that these dogs were ever bred for any other purpose, eh? A pet is an honorable enough occupation; let us not gild the lily with nonsense histories or contrived work.

And as for ratting, let me say this clear: any dog can rat. A whippet is a fine ratter. But it is not a terrier. If a dog is too large to go to ground, and has never gone to ground, it is not a true terrier, because it is not a dog of the dirt.
.

How about little ratters that were terriers but decided life in the barn or granary was more to their liking?

I mean, if you're dwelling on the history.

As for breeds, it is difficult indeed to explain that it is really a form of branding - copyrighting as it were, of a shape developed within a family of animals that is virtually identical across shapes for sometimes - but not always - superficial reasons.

It's a filing system, much like Groups. Administrative organization.

That's why, when they bring in a 'breed' ban, it really isn't a breed ban unless they exclude mixed breeds. Which they don't, because that's the real target and the purebreds are just used as a template because they need a picture, no matter how vague. Thanks to the branding by the clubs, they are available.

And thanks for the Dachshund remark. They are terriers and should be moved out of Hounds and into Terriers with all those non-terriers...no, wait :>)

an American in Copenhagen said...

If a dog is defined by what it does in the field, then what is a dachshund that does the work of a hound? Is he a hound or a terrier? My dachshund COULD go to ground, but that's not what I use him for. I use him as a scenthound; does that mean that he's still a terrier doing a hound's work or is he just a hound?

If he does a hound's work, he's a hound.

Some dachs are both terriers AND hound, depending on the season!

I have owned MANY airedales from many different lines, grew up with them. Every single one has been fanatical about digging - including enlarging holes of woodchucks, chipmunks, you name it, to try and get the varmints. So, I will continue to consider them a terrier. It wasn't until our most recent one that we noticed any hound qualities - he has a phenomenal yodelly howl.

I really found this post interesting. I can't pretend to have ever known what a true terrier was.

I have a Boston terrier mix of a mutt. At least that is what the "dna" said. She is only 30 lbs.

Are Bostons really a terrier? Or are they more in the category of bulldog because of the face.

I just find myself wondering because I see the working terrier pictures, and have to keep my dog from digging and going after pests like that. I had a possum under my house I have had to deal with pest removers to come and set "traps", and it is my dog's life mission to get this possum. Only I am afraid of her getting hurt or diseased! lol.

Anyway. I love all the history and information here. It amazes me because you're absolutely right. If you go to most rescues and inquire about the mixed breeds. They almost always want to refrain from using the word pit bull, and they love to say "terrier mix".

I have a beautiful red merle (recessive red with ticking) JRT who is a CLASSIC JRT - so of course, people don't believe she is a "real" JRT. She leaps, plays, goes to ground, digs, is obsessed with her tennis balls - all the JRT things. :) It's nice to see someone espousing real terrier traits, instead of beauty-as-skin-deep parameters. Thanks.

Although the Bull Terrier was a designer and show breed (made of pitbullterriers and white english terrier, collie, greyhound, foxhound and whatever), they still make good hunting dogs ! Not underneath the ground, but for catching boars

By that criteria, many Labradors are terriers ;-)
I think the Earth dog is supposed to fit in the hole.

We don't get out to the country all that often, but there is NOTHING our terrier (Lakeland, or medium sized as I tell questioners on our walks)) likes better than digging a lifelike possum toy out from under a sofa cushion and shaking it until it is dead. Instincts are string for sure.