Freak on a Leash Is it me, or is there something wrong with cloning pit bulls at a time when thousands of them a day are being put to death for no other fault than the fact they are pit bulls?

That was my initial thought when I found a fat blonde American woman had sold her house in order to get the money to have the Koreans clone her dead dog. The dog's name was "Booger" and now there are five little black snot rolls suckling on the side of a yellow hound mongrel who is their surrogate mom.

"Ah, get over it," I thought. This is a waste of money, but it's no worse than some fool having another litter of puppies because "Tricky-Woo is so special."

Then I started thinking of how ferked up someone has to be to sell their house in order to get the money to clone their dog. Talk about needy.

But a lot of people are a bit over-needy when it come to their dogs. As I have noted in the past, a lot of these folks seem to have human relationships that are wrapped around the axle. Sometimes these folks have personality disorders, and sometimes it's because they are not able to have kids, and sometimes it's because they are socially awkward and/or have light doses of mental illness.

No doubt this lady was one of those, and a quick look at the picture below seemed to tell me quite a lot. 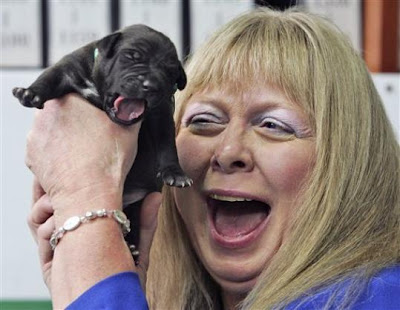 I let it go. No reason to kick the sick, right? I would not post on the Korean pit bull cloning thing.

And then I clicked on my Google Reader and saw that Gina, over at Pet Connection, had stumbled across an article about who this woman really is.

Her real name, it seems is not 'Bernann McKinney' but Joyce McKinney, and some 20 years ago she was involved in the 'Mormon Sex Slave Case' in which she was the assaulter, rapist, and kidnapper.

Oh. My. God. As The Daily Mail noted:

In 1978, Joyce McKinney jumped bail and disappeared after being charged with kidnapping a 17-stone male Mormon missionary, whom she had chained to a Devon cottage bed with mink handcuffs and forced to have sex.

At the time, she famously said of her victim: 'I loved him so much that I would ski naked down Mount Everest with a carnation up my nose if he asked me to.'

Now if you can stop reading there, you are a better person than I am.

I wanted more. And, The Daily Mail, of course, was only too happy to oblige:

So, dear readers, let us turn back the clock 30 years to Joyce and the sensational circumstances of what became known as the 'Mormon Sex Slave Case'.
Joyce McKinney was born in Avery County, North Carolina, in August 1949, the daughter of two school teachers.

She first made the headlines, albeit local ones, in 1972 when she was crowned Miss Wyoming, but soon tired of the world of beauty pageants and enrolled as a drama student at Brigham Young University, in Utah, the heartland of Mormon America.

It was there that she met 19-year-old Kirk Anderson, a 6ft 4in fellow drama undergraduate, some seven years her junior, from a small town near Salt Lake City.
There was a brief fling, and McKinney later claimed that she had miscarried his baby.
Overcome by guilt, Anderson, a devout Mormon, apparently sought advice from his bishop, who told him to sever ties with McKinney and move away from Utah.

She was not prepared to be spurned so easily. Private detectives were hired to trace Anderson from the U.S. to Ewell in Surrey, where he was living as a door-to-door Mormon missionary.

In the summer of 1977, McKinney flew to England with an architect friend called Keith May.

Armed with an imitation revolver, May confronted 21-year-old Anderson on the steps of Ewell's Church of the Latter Day Saints, and frog-marched him to a car in which McKinney was waiting.

Chloroformed and hidden under a blanket, the bespectacled Mormon was driven some 200 miles to Okehampton, where his kidnappers had hired a 17th-century 'honeymoon' cottage for £50 a week.

McKinney later said that she had packed the fridge with Anderson's favourite food and studied The Joy Of Sex in preparation for what was to come.

May chained the prisoner to a bed. For two days, McKinney tried to persuade the missionary to marry her and father her children. She even read Scriptures with him in bed.

When this failed to melt his opposition, McKinney reverted to Plan B.
This involved slipping into a 'see-through nightie', playing a cassette of 'romantic music', having Anderson 'spread- eagled' and sexually stimulating him.
She claimed this was a bondage 'game' played with his full consent.

He later told a court: 'I couldn't move. She grabbed the top of my pyjamas and tore them from my body until I was naked.

'I didn't wish it to happen. I was extremely depressed and upset after being forced to have sex.'

For the record, his pyjamas, later produced in court, were light blue and 'silky'. He also claimed to have been wearing some kind of Mormon chastity belt underneath. Alas, to no avail.

Fearing he would be kept prisoner for weeks (later there would be a body of male opinion which felt pangs of severe jealousy at his plight), Anderson promised to marry her.

But after she loosened his chains, he escaped and went straight to the police.
McKinney and May were arrested at a roadblock three days later and charged with false imprisonment and possessing an imitation firearm.

McKinney spent three months on remand in Holloway Prison - to which she had been driven weeping through the bars of a Black Maria - before being released on bail on grounds of her failing mental health.

Now the case, which had already become a worldwide cause celebre, was about to be given a new lease of life with a sensational twist.

McKinney met the similarly bailed May and the pair fled to Canada, using false passports and disguised as deaf-mute mime artistes.

It was later alleged that McKinney was helped to escape by her former landlady, an Irish woman, who went with her to a West End theatrical outfitters.

There, they bought the wigs and glasses which were later used in their flight from justice.

By now an international fugitive, McKinney reappeared staying at the Hilton hotel in Atlanta, Georgia, disguised as a nun.

Once again, she was freed on bail and, by now - 1979 - there seemed to be no appetite in the UK for forcing her extradition.

She resurfaced once more in 1984, when she was arrested near Salt Lake City Airport, where Kirk Anderson - the Mormon she had kidnapped - was working.

In her car, police found a length of rope and a pair of handcuffs. The implication was clear that she was about to make a second kidnap attempt, but she failed to show up in court and the case was dropped.

By the late Nineties, McKinney was back in North Carolina, dogged by ill health and often in a wheelchair, living on benefits in a remote smallholding with only three ponies and a fiercely devoted pitbull called Hamburger for company.

On one occasion, she had broken into a dog pound to rescue a pitbull terrier - possibly Hamburger - which was to be put down for mauling a jogger.

'I love those pitbulls,' she explained. 'They're such sympathetic animals.'
Locals, who knew of her racy past, treated her with suspicion, if not fear. She had a taste for litigation and was described as 'one wild woman'.

In a rare comment on the Mormon affair, she said in 1999: 'I loved Kirk and all I really wanted was to see his blond-haired babies running round my home.

'Nobody can understand what it is to lose the man you love to a cult, and I believe that is what the Mormons are. Back in Britain [then] nobody knew what a cult was.'

May was last heard of selling plumbing supplies in California, while Anderson was an estate agent in Utah and understandably reluctant to rake over his past misfortunes.

Done properly, this will no doubt be produced as an opera. The Daily Mail link has more picture, and I have posted the most charitable below.

I end this post now for a simple reason: Words fail me. 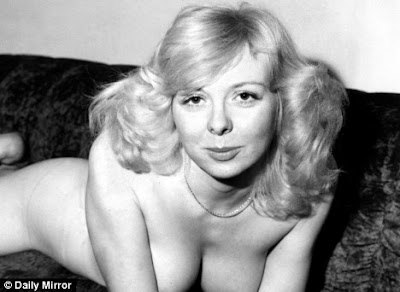 Clone my dog? Nah, I don't even like repeating a shape.

I don't care if she wanted to give it a try, though, it's her money and ultimately, her heartbreak.

What irked me was Pacelle spouting off about 'pit bulls' being in crisis, blah blah blah. Yeah, Wayne, I wonder how that happened?

This lady is a lovesick nut and the world's full of them.

Old Mother Hubbard
Went to the cupboard
To get her poor dog a clone.

McKinney’s strange life trajectory brought her to Carter County, Tenn., in 2004 with a different pet-oriented mission impossible: obtain money to buy a prosthesis for her three-legged horse, said an attorney who represented her.

To aid her, she brought a black wig, bought gloves from a discount store, and enlisted a 15-year-old boy off the street to help her burglarize a house, authorities allege. The caper ended badly, with the teenager wearing a wire to record her, and law enforcement officials charging her with conspiracy to commit aggravated burglary, contributing to the delinquency of a minor – and speeding.

“Really, really weird,” is how the arresting officer remembered his brush with McKinney.

I cared for McKinney's mother in the hospital for a couple of months. She (Joyce McKinney) had to be escorted in and out of her mother's room with a security guard because she had verbally and physically attacked another nurse. She was only allowed to visit for one hour each day.
Her father is completely bananas too.

McKinney's mother was a patient at the hospital where I work. She (Joyce) was not allowed to visit unless accompanied by an armed security guard after abusing (verbally and physically) another nurse on the unit. She and her father were convinced the staff were trying to kill her mother (who was intubated, on life support, and had expressed a desire to die because she was suffering so profoundly), and were apparently scheming to kidnap the comatose woman and abscond with her to God knows where. She was and is a completely insane human being.