What's that look like? Well, if the average dog/cat weighs 30 pounds, that works out to be about 30 TONS of dead animals coming out of PETA's shelter every year.

As I have asked before, how is it that PETA is licensed as a "humane" shelter in the state of Virginia when, in fact, they are actually running a slaughter house? 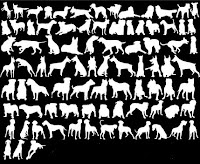 how are they licensed? probably same as anything else they get, through fear. I can't imagine the license granting office has a huge budget. Could easily be broken by a lawsuit and I'm sure that PETA is top heavy with attorneys to write a few threatening letters.

Take away their "non profit' status.. see the lawyers go wild...see PETA squirm.. they need ot go down.. and more and more people are learning the truth..PETA KILLS ANIMALS

Great post. Check your math on the kill rate (you were way too kind) -- but the visual representation is great (although disturbing).

Thanks Brent -- the math is right, and the discrepancy has to do with a small number of dogs transfered which are neither placed nor killed. Basically, however, you are right: the kill-to-adopt ratio is HIGHER than 90 percent.

Great post. PETA definitely do more harm than good... In fact, I'm hard pressed to think of any good that they do, in comparison to legit animal welfare org's. They are nothing but a PR factory for their own brand. Even their use of guilt-ridden, barely informed celebrities harms the cause of animal welfare, often turning it into a joke. They are anti pit bull, and are the only animal welfare organization I know of that advocates BSL, and wants to euthanize all pit bulls, allegedly to combat the abuse some of them encounter. Make sense? Didn't think so.

Maybe it's that radical utilitarianism, the Peter Singer kind, that says it's better to die than live in pain. (Even if someone else gets to determine whether or not a creature lives in an unacceptable level of pain.)

Who said these animals were in pain? They weren't.

And is this the same Peter Singer who says it's OK to fuck your dog?

Right. How else is Newkirk going to get a date?

It IS hard to make sense of, isn't it?

I think the place to start is to realize that PETA is not about the animals. Ditto for the AKC folks who parade dogs around on string leashes at dog shows.

For these folks, the dogs are simply a device to feed their own egos. The PETA lunatic and the Kennel Club zombie are both trying to achieve status through the dog. The dog, however, is simply the stairs they are using to climb on stage. They do not care too much about the dog.


And so, the folks at PETA are not interested in adopting animals any more than the AKC is interested in changing breed standards and AKC rules in order to improve canine health.

The goal of PETA is not happy dogs in homes, but getting their name in print and their faces on TV. The AKC show breeder is not interested in healthy dogs; he or she is interested in doing what it takes to get a blue ribbon. In both cases, it's not about the dog.

PETA zombies are like brain-washed members of a religious cult. They are not free thinkers; they are mostly young women from suburban households who join up with PETA because it gives them a sense of community, same as any cult.

The PETA-cult position is that all dogs are prisoners or slaves, and by definition their very existince is unnatural and a kind of torture. These people believe, quite literally, that poodles and chickens should be returned to the wild.

Since a dog is an artificial thing, it should be killed any time it cannot find a human to defend it with a hammer and a gun.

And so PETA workers have gone to other states to lie about their intentions, pick up animals from other shelters, and kill them. In their mind, PETA zombies think they are "liberating" these dogs from human ownership. At their core they think they know what is best for ALL dogs and ALL people, and ALL animals everywhere. And never mind if they do not know a thing about biology, ecology, history, genetics, or taxonomy. Never mind if they have never even seen the animal in question, visited a farm, gone hunting, owned a dog, or known anyone dying from a disease. They do not need to KNOW. They do not need facts. Like all cult members, they sleep walk forward, and if their religion says it's OK to kill dogs to "free them from their mortal coil," then so be it. It's all about their philosophy, their egos, and their need to feel important and connected to other cult members in this increasingly complex and anonymous world.

It has nothing at all to with the dogs.

If a dog is an artificial thing, then it definitely fits the definition of property. They try to have it both ways, but the fact is that by a human being's right to property, what he makes is his (or hers).

Agencies like PETA, the HSUS, and the SPCAs whine when they see people keeping dead animals in a chest freezer. Yet they also freeze dead animals to keep them until they can be cremated en masse, and PETA has that famous walk-in freezer. Just another example of hypocrisy and of trying to take advantage of weak minds.