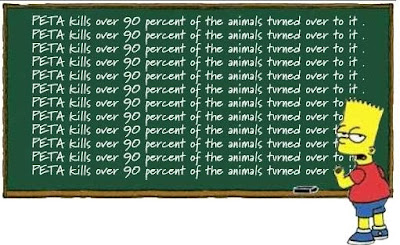 PETA lawyer Jeffrey S. Kerr is a total moron. That is the only conclusion I can reach after reading his absurd paper-rattling letter to Universal Press Syndicate columnist Gina Spadafori threatening libel because she had the temerity to write that over 90 percent of the animals that end up at PETA's "shelter" end up dead. Read all about it here.

Here's a note for Mr. Kerr -- truth is an absolute defense for libel. And discovery here is going to be a bitch (pun intended).

PETA does, in fact, run one of the most notorious kill shelters in America. And the kill data are public.

PETA does indeed kill over 90% of the animals turned over to it and though the organization has a budget of over $27 million a year -- mostly spent on self-promotion as far as I can see -- it spends almost nothing on rehoming dogs and cats, preferring to rush them to the "blue solution" of death instead.

And how often does it do this? Consider this: PETA's "humane society" operation averages one ton of dead animals a month going out its back door.

One Ton. PETA, it seems, stands for "People Exterminating Tons of Animals."

PETA not only kills almost every dog and cat turned over to it, they also proactively go out to pick up perfectly good animals from other shelters in order to kill them and illegally dump their bodies in roadside dumpsters.

All of this is fact.

Want to read and see more? Check out this previous post.

And yes, feel free to cross-post it to list-servs, web sites, and forward to family and friends. Let's tell the story far and wide that Mr. Kerr is ashamed to see in print.
.
.

oh Patrick, you're going to get a letter...

Do I sound scared of these fools? Not for a second. Bring it on!

Kerr is gonna have a cow when he reads this.
Poor cow.

Go for it. We're feeling neglected up north, none of us got letters *snivel*.

Peta had better hire some more lawyers and go looking for more donations, their legal fees are going to skyrocket.

IMHO, Peta's letters only prove one thing to me. That Peta is frightened of the truth getting out, and thinks the bloggers have sufficient credibility to damage its reputation.