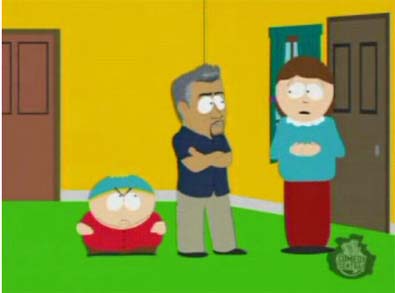 
One of the core messages of "The Dog Whisperer" is that dogs are not children. The converse can also be said, but, in fact, most over-indulgent suburban parents could learn quite a lot about raising children by studying basic operant conditioning -- the kind of thing you learn in dog training.

In the long version of the Southpark program Cartman sends two TV reality show "Super Nannies" over the edge. Why had the Super Nannies failed? Well, in Southpark it's because the nannies tried to reason it all out and because they really had no serious consequences to offer -- a "time out chair" stops working at about age six.

With nowhere else to turn, Cartman's mom calls Cesar Millan, "The Dog Whisperer."

As in the National Geographic TV show, Millan is all about "dom-ee-nance." Millan says the problem is that the child (Cartman) is leading the adult, and it needs to be the other way around. Or, as Millan puts it, "This walk is about me, the child is merely lucky enough to come along."

Watch as Mrs. Cartman get her life back, and as Cartman learns that bad behavior has bad consequences.

In the real world of dogs, kids and adults, the rules are really not that different: "Do good, get good. Do bad get bad."

Really, isn't that what both job performance bonuses and the criminal justice system are all about?

If you watch the long version of this South Park episode (no longer on You Tube, but look around in Goolge Video, as the world will be free) you will notice that Cartman turns his life around, but at the end that Cartman's mother reverts back to enabling behavior as soon as Cesar Millan is out of the picture.

Even in the Southpark version of the "Dog Whisperer," the realities of the human condition intrude. That's good cartooning!