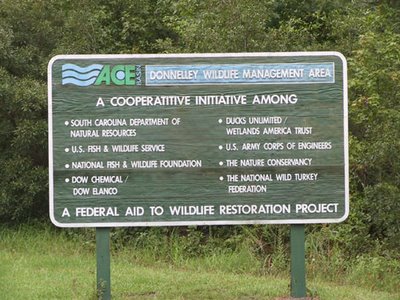 On this South Carolina sign, a lot of groups, political divisions and corporations are taking a bow, but the real source of the acquisition money can be found in the big type on the bottom -- the Federal Aid to Wildlife Restoration Act. This is money paid by hunters for hunting property, and it is a terrific federal government program that has been working without a hitch for 70 years.


Earlier this week, I was hunting on some of the 44 million acres of Pittman-Robertson land available to hunters across the U.S.

What's is Pittman-Roberts land? Pittman-Robertson is a law approved by Congress in September of 1937 which provides funding for the selection, restoration, rehabilitation and improvement of wildlife habitat so that wildlife may be readily available to American hunters. Sometimes known by its more formal name, the "Federal Aid in Wildlife Restoration Act," the law now includes money for hunter training programs and public target ranges as well. Most of the property designated as a "Wildlife Management Area" in your state will be land acquired through the Pittman-Robertson Act

About 4 million acres of P-R land has been bought outright, and about 50 million acres are under long-term lease from private land owners for the use of hunters. For the record, this is an area larger than the states of Pennsylvania, Maryland, Delaware and New Jersey combined.

Pittman-Robertson land is acquired through a dedicated 11 percent Federal excise tax on long guns, ammunition, and archery equipment, and a 10 percent tax on handguns. These funds are collected from the manufacturers by the Department of the Treasury and are apportioned each year to the States by the Department of the Interior based on a formula that factors in both the total area of the state and the number of licensed hunters in the state. Pittman-Robertson is a cost-reimbursement program, which means the states must first cover the full amount of an approved project and then apply for reimbursement through Federal Aid for up to 75 percent of the project's cost.

The Pittman-Robertson program may be the most effective and least written about Federal program ever created. Since its inception, more than $2.5 billion has been spent acquiring land for hunters, and as a consequence every species has benefited. Among the notable wildlife successes on Pittman-Roberston land has been the return of wild turkey, white-tailed deer, pronghorn antelope, wood duck, beaver, black bear, giant Canada goose, American elk, desert bighorn sheep, bobcat, mountain lion, and large numbers of raptors, to say nothing of such non-game species as song birds.

While Pittman-Robertson land is specifcially bought and paid for by hunters for hunters, hunting occurs only in season, and most of the time the land is a sanctuary for every other type of wildlife imaginable -- including groundhog (unlimited take, no season) as well as red fox, raccoon and possum (and out west, American badger).