Shakespeare in the Park 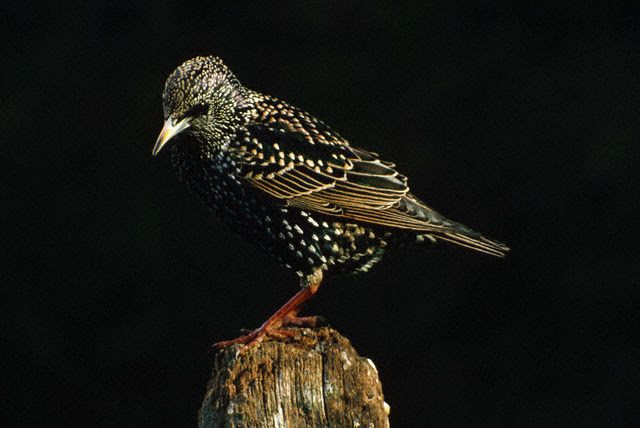 Starling on fence post showing the distinctive "star" markings that give the bird its name. 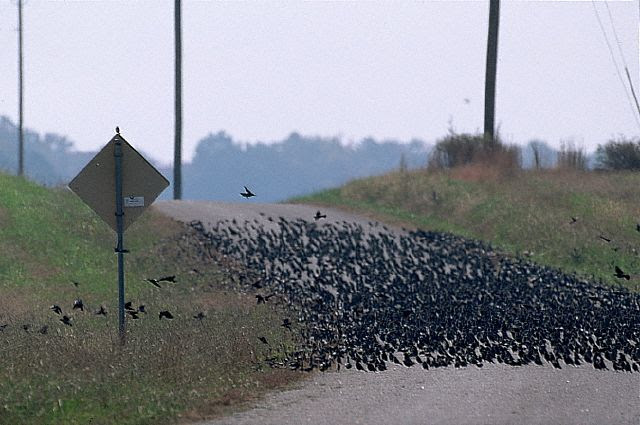 Starlings flocking on a warm road in rural Virginia on a cold morning.

Repost from 2005
When out with the dogs in winter, we often see large flocks of starlings, often with cowbirds and blackbirds mixed in, winging down to settle on cut-over corn fields and soy rakes, huddled on the lee side of shed roofs, and even settling on roads in order to make use of the warmth radiating up from the black tarmac.

Believe it or not, the more than 200 million European Starlings found in North America today are direct descendents of approximately 100 birds introduced into New York City's Central Park sometime in the early 1890s.

Sturnus vulgaris owes its presence in this hemisphere to an odd little New York City group called the "American Acclimatization Society" which was dedicated to introducing all of the birds mentioned in William Shakespeare's works into Central Park. Previous attempts to introduce Starlings in the Northeast, Midwest and on the West Coast had failed, but the 1890 release was spectacularly successful, as today's massive winter flocks attest.

You rarely see massive flocks of starlings in the Spring and Summer. During these times of year Starlings are far more solitary, seeking out hollow trees, ledges and building eaves in which to construct their nests.

As a general rule Starlings avoid woodlands, deserts and open grassland, prefering man-altered environments such as cities, suburbs and grassy freeway medians where they can forage for bugs, seeds, berries, and insects.

In Europe the Starling is a migratory bird that forms large winter flocks bound for North Africa. When transported to the U.S., however, the Starling seems to have lost its bearings. Where, exactly, is is supposed to be migrating to? It does not know.

On the East Coast of the U.S., Starlings form winter flocks up to a hundred-thousand birds strong, but these flocks often travel just 50 to 200 miles before settling back down again.

No climate improvement is achieved over such a short distance, but a vague genetic itch has been scratched, and the birds seem to be no worse the wear for overwintering close to home.

Starlings in the Midwest migrate much farther south than those on the East Coast, probably because some individuals were blown farther south during winter storms and learned a migration routes back north by following blackbirds up from Louisiana and Mississippi in the Spring.
.

that would suck if a troll ransaked a cottage :(

This is a beautifully-written and interesting post. I live in NYC and see those enormous flocks of starlings all the time.

Some Midwestern starlings may migrate, but large numbers still winter on the Great Plains. Flocks of urban starlings keep some merlins, normally a highly migratory falcon, resident as far north as Winnipeg, Manitoba. Here in eastern Nebraska, urban or small-town settings (especially near grain elevators) are the best place to find migrant and wintering merlins; I doubt that would be true in the absence of starlings.

Starlings are kinda unusual, even though they mass swarm my bird feeders and can be really loud. I've heard that they are very intelligent and mimic human speech like crows, parrots, and mynah birds. Some people even keep them as house birds.

Can you believe that some people get pissy when my kestrel kills one?!