The Sad Rise of Hard Dogs 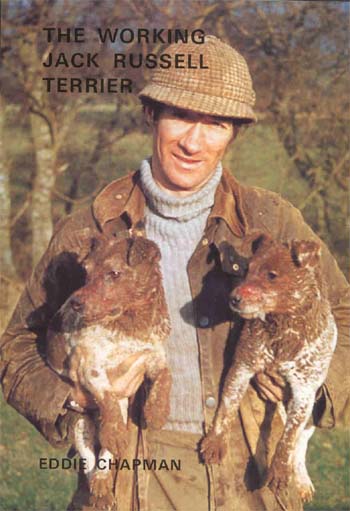 Just as the world of rosette-chasers is filled with those chasing an ever-changing image of "the perfect terrier," so too are there those chasing idealized visions of the perfect digging dog.

I myself do not put much stock in theories of perfection, and I generally write off anyone who starts bragging about how wonderfully "hard" their terrier is.

As a rule, these folks are young and have not yet dug too much.

A very hard dog that insists on coming to a grip every time it goes into a hole is a liability if you work your dogs on a regular basis, as a wrecked dog may be out of the field for several weeks or even a month or more.

A dog with brains and experience will generally box and press in the hole, but it will receive little serious abuse, as it will soon learn "butt from breath."

And yet we continue to get folks showing up in the world of working terriers who want to talk about how hard their dogs are.

Where do these people comes from?

Eddie Chapman provides an answer in his book, The Real Jack Russell Terrier:

To put a date on it, the beginning of the sixties was the start of the wage rise boom and in just a few short years people started to find they had money in their pockets for other things than the bare necessities. Working men suddenly had transport, and terrier clubs were formed in the industrial areas because they were no longer confined to their home towns or villages.

Working terriers, it seems, have a strong appeal to young men looking for excitement, and if you have ever been in a pub or club full of beer drinking young terrier enthusiasts you will know what sort of atmosphere can be created by the loud mouths, parading around with their macho-looking battle scared head-badgers, all boasting that they smashed this and smashed that. So impressionable young men could hardly resist when the opportunity arose to become one of the so-called in-brigade, loosely referred to as 'Terrier Men'.

To be one of the lads, it seemed imperative that you had a macho dog to fit the image, and the ultimate test for the macho terrier man's dog was the Badger. To dig Badger you traditionally needed a Baying terrier, so there was suddenly great demand for the best Jack Russell blood, and large prices were paid by these newcomers for the best Jack Russell blood available.

As more and more joined the terrier clubs, the macho image of the harder terrier became almost a cult, and some even traveled to the far north in pursuit of the legendary hard terriers bred exclusively to kill Foxes in the undiggable rocky hills up there, and so the cross-breeding began.... [T]oday, only thirty years on, we find that so much cross-breeding has been done that the original pure-bred strains are in very small minority indeed. The macho terrier men are almost all gone, and the gangs they created, with the image that they portrayed, gave the antis all the fuel they needed to persuade the general public that with literally hundreds of new people suddenly joining the sport, too much pressure was being put on the Badger population, so that it was in danger of being extinct, and 'bang' a Law was passed that protected them from being dug.


So there it is -- a lot of young people who do a small amount of digging and a great deal of drinking and talking.

Ah well! As I said before, each to his own.

I myself do not value too hard a dog.

The most important tool is voice.

Yes, there is a place for teeth to punctuate the paragraphs when needed, but a truely HARD dog? No, I think I will pass on that animal, and pray I do not get another again.

You see, I do not speak from theory, but from experience. A truely hard dog is a sadness waiting to happen.

But why do I want a mixer?

Simple: When you are digging on groundhogs, you cannot afford a dog that will never engage, as otherwise too many groundhogs will get an opportunity to dig away.

The ideal dog then is an experienced dog that learns more than one technique and is able to call on those techniques, on the fly, depending on the quarry in the hole, the lay of the land, and the temperment of the animal it has bottled up below.

All that I require of my dogs is that thay they find in the field, go to ground with enthusiasm, locate, notify me of their actions underground with their voice, and prevent the animal in the pipe from digging away if it is able.

Do I require them to stay for 8 hours? No. I have only rarely had a dig last longer than three hours, and most last far less than that.

Sorry, but if you are looking for wild yarns about dogs lost for three days underground, and only free'd with the help of a backhoe and two sticks of dynamite, I am not your person.

Besides, call me a fairy if you want, but I do not call a dog lost to ground for three days a success.

I do not count having to lose work and money on field rescue a mark of experience.

Yes, all my dogs have scars on their muzzles, but here's a little bit of truth: most of those scars were earned when those dogs were still young and learning their craft.

"An experienced dog generally uses that experience to avoid injury."

So do experienced workers, whereas young hands take pride in doing stupid things that can get them seriously hurt, like it's manly to be injured. Funny how we have the ability to communicate knowledge to each other, and yet we still learn safety the same way a dog does. :)

The whole world is country, Better alone than badly accompanied. Are teetota ! I prefer to bring the prey above the shoulders is not the dog. Idiots are everywhere, this debate has happened to me a few days ago it with a friend who sold me a puppy Patterdale but immediately gave great satisfaction . We know the trends are transitory.;)

Thank you for writing this in the first place and also for reposting it. It should be required reading for all new diggers. I cannot imagine why someone would enjoy getting their terrier all banged up. A shame also that the macho brigade has become the poster image of terrierwork, spoiling it for those who love it and dig with respect and diligence. Brains always come first with the dog. Much more good memories of good days to look back on with a smart dog in the ground.

Experience is not the BEST teacher for most living beings. It's the ONLY teacher. And sadly, for some of us, it still doesn't work.

People learn by reading, by listening, by thinking, and by doing. In the modern world, I think that's also about the right order.

That said, I think it is absolutely true that we learn to stop doing self-rewarding behaviors by having a negative experience. Negative experiences are very powerful ones. We cannot remember what we had for breakfast two days ago, but we remember a very bad experience like it was yesterday.

Have a pair of 2 year old working bred terriers . Smooth coat bitch a joy to dig to , one hole and straight on top . The dog rough coat , farm bred and handsome is a nightmare , up and lock no sound then sore for weeks