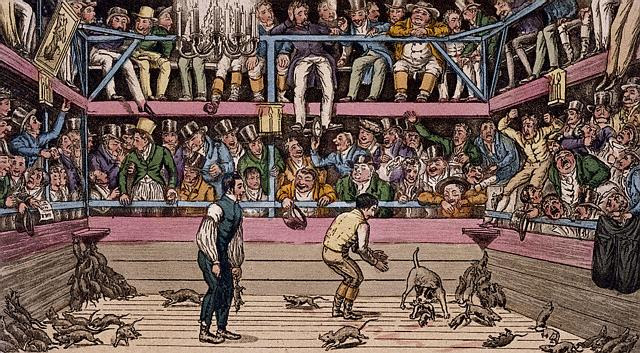 I'm off to Brooklyn this morning, so it seems fitting to post a little terrier history from that Great City.

The last rat pit in New York City was owned by Christopher "Kit" Burns, and operated as "Sportsman's Hall" at 273 Water Street. The building still stands.

Burns was supposedly a tavern keeper, but in actuality, he was one of the last of the "Dead Rabbit" gang made famous in the Martin Scorcese movie, "The Gangs of New York." The Sportsman's Club was ostensibly a bar, but it derived a large portion of its revenue from rat killing spectacles, and the occasional dog fight.

As James Dabney McCabe, writes in "Secrets of the Great City


"Rats are plentiful along the East River, and Burns has no difficulty in procuring as many as he desires. These and his dogs furnish the entertainment, in which he delights. The principal room of the house is arranged as an amphitheatre. The seats are rough wooden benches, and in the centre is a ring or pit, enclosed by a circular wooden fence, several feet high. A number of rats are turned into this pit, and a dog of the best feral stock is thrown in amongst them. The little creature at once falls to work to kill the rats, bets being made that she will destroy so many rats in a given time. The time is generally 'made' by the little animal. . . . "

Kit Burns had two of his favorite dogs stuffed and hanging over the bar. One was called Jack, and was a black and tan terrier that had killed 100 rats in 6 minutes and 40 seconds, an American record. The other dog was Hunky, a dog fighting dog that expired after his last "victory".

Kit Burns's last rat pit fight occurred on November 21, 1870 according to Robert Sullivan's book, Rats, on an occasion when 300 rats were "given away, free of charge, for gentlemen to try their dogs with." Henry Bergh, who founded the SPCA, raided the establishment that night, and Kit Burns was rounded up. Though everyone involved was acquitted, Kit Burns caught cold and died before trial, and the Sportsman's Club was permanently closed.

Kit Burns's widow told a reporter from The Sun newspaper that Mr. Bergh, the SPCA man, was invited to visit her at her new home in Brooklyn "provided the gentleman will have the kindness to bring his coffin with him."
.

Corrected that! It's FRANCIS Coppola and MARTIN Scorcese. All those Italian movie directors get mixed up in my old noggin'.

When Pete Hammil talks about "My Manhattan," is he referring to the place or the drink, LOL? Glad he got sober!

I think thats the reason Bull Terrier was Crossed into the JRT im not sure...though