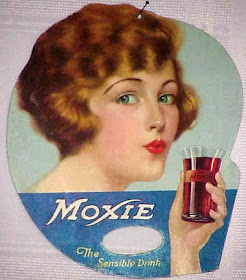 A few words about the new pup's name -- Moxie.

Moxie is a uniquely American word that means courage, determination, and a kind of brave and effervescent creativity combined with a can-do attitude.  Think pluck and spunk.

"That girl has a lot of moxie." 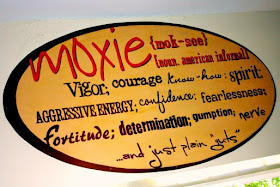 The word itself is derived from the name of America's oldest soft drink brand, first marketed in Maine as a medicine in 1876 by Dr. Augustin Thompson.

Described as tasting like "liquid pain" and a mixture of "castor oil, horseradish, and bitter herb tea" the actual ingredient doing most of the talking is gentian root extract with a strong dose of wintergreen tossed on top. Suffice it to sat that the stuff was, and is, sufficiently different and initially unpleasant tasting enough that people are told they will have to "Learn to drink Moxie." 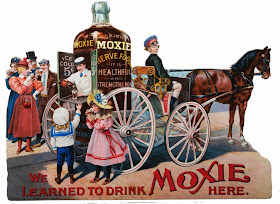 Moxie was said to cure everything from depression to alcoholism.

Did the earliest formulation contain cocaine?  Probably, but that was long gone by the turn of the century and the 1906 ban on this then-popular soft drink additive.  By then, Moxie Nerve Food was touting itself as a natural cure-all:

Contains not a drop of Medicine, Poison, Stimulant, or Alcohol. But it is a simple sugarcane-like plant grown near the equator and farther south, was lately accidentally discovered by Lieut. Moxie and has proved itself to be the only harmless nerve food known that can recover brain and nervous exhaustion; loss of manhood, imbecility, and helplessness.

It has recovered paralysis, softening of the brain, locomotor ataxia, and insanity when caused by nervous exhaustion. It gives a durable solid strength, makes you eat voraciously; takes away the tired, sleepy, listless feeling like magic, removes fatigue from mental and physical overwork at once, will not interfere with action of vegetable medicines.


There was, of course, no "Lieutenant Moxie."  This was more advertising puffery.  The term Moxie may have a Native American origin, as there is a Moxie Falls in Maine and a Moxie berry (aka creeping snowberry), and a Moxie Cove but it also may have Yiddish origins, derived from the German Macht's Sie which translates as "Makes You."  Who knows!

Moxie salesmen drove cars (some of the first cars in New England) that said "Drink Moxie" on the side, and the company was one of the first to use advertising jingles to sell its product.

Moxie had good strap lines, ranging from "Make mine a Moxie," to "She's got Moxie," which had the kicker, "The girl with moxie is the girl that gets ahead."

The company was not shy about insinuating that popular outgoing stars of the day got their get up and go from Moxie, and baseball player Ted Williams was a paid pitchman for the drink in the 1960s (as I think he was for everything else!). 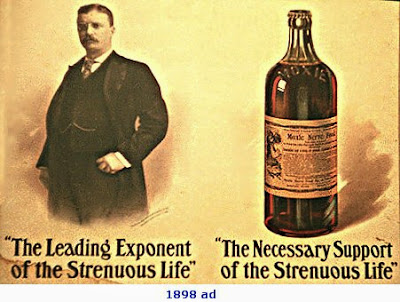 The Moxie company even had a series of cars with a full-sized paper-mache horse inside -- an early version of "Whiskey-Tango-Foxtrot" advertising hard to beat even today.

Eventually, the word "Moxie" was added to the dictionary with the definition: "The ability to face challenges with spirit and courage" and "aggressive energy and initiative".

In short, all the qualities associated with a working terrier. 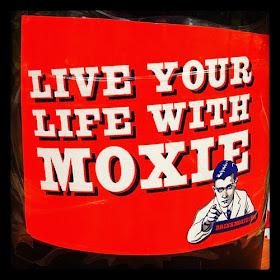