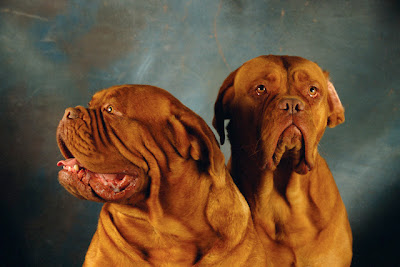 Tomorrow, on Thanksgiving Day, NBC will be featuring "The National Dog Show Presented by Purina" which will introduce the newest American Kennel Club-sanctioned breed, the Dogue de Bordeaux.

What will not be said: the dog is a complete genetic wreck and has been heavily inbred from a small gene pool in the U.S. following the rapid popularity of the dog after the Tom Hanks movie "Turner and Hooch" came out in 1989.

Some numbers from the UK Kennel Club (N = 76 dogs) gives a glimpse of the extent of the health problems associated with this newest dog to be ushered into the American Kennel Club's parade of defect, deformity and disease:

Is this this dog the American Kennel Club intends to showcase at Westminster?

Is this the dog the U.K. Kennel Club intends to showcase at Crufts?

If so, excellent, for it is a perfect case statement for everything that is wrong with the American Kennel Club and the British Kennel Club.

Once again the Kennel Clubs embrace and elevate a breed without any health considerations what-so-ever.

Once again they continue the tradition of ushering forward canine misery for the sake of human vanity and amusement.

What is the most diseased (perhaps a top 5?) dog breed?

While, say, 100% of dwarf dogs are diseased, I'm more interested in the unintentional inbred diseases.

If I had to venture an uneducated guess I'd say the toy breeds with their toothless mouths, or those collapsed noses and throats.

Or maybe I want to know about non-structural diseases, like myopathy in Dobermans or deafness in Dalmatians.

As long as there are bear, cougar, boar, and coon hunters that use Plotts, they are in no danger of being totally ruined by the AKC. They will simply diverge into working strains(as registered by the UKC)and useless AKC conformation show strains. Just like the only other "coonhound" the AKC has registered for years, the Black-and-Tan. No hunter even pays any attention to AKC Black-and-Tans. Just like the working strains of Labradors, Siberian Huskies, Australian Shepherds, Border Collies, Etc. etc., etc., ad naseum, vs. the show strains of these same breeds.......L.B.

Not only is it sad they would showcase a breed as genetically distraught as the Dogue de Bordeaux, but I fear the day they showcase a breed I've known and loved, and now hate- the Cane Corso.

The Cane Corso has not even been accepted into AKC misc. for very long (less than a year) and long before has been a breed prevalent with health issues. A breed that only needs to have (and not even always as it's consistently excused because they are a molosser) passing hips to be worthy to be bred. Heart problems run rampant in this breed, along with PRA cropping up and many lines have epilepsy through them as well. However breeders do not test for this, as if they do not care! I have owned several breeds throughout my lifetime and I must say of all of them, the Cane Corso was the biggest genetic nightmare!