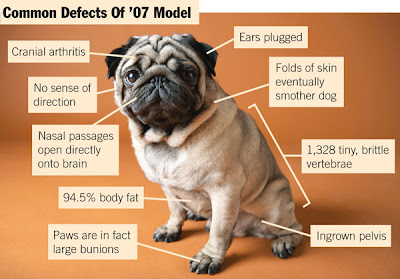 From The Onion comes this little treasure:

WASHINGTON, DC—Citing centuries of quality- control issues that have resulted in chronic unreliability, cascading system failures, and even total unit shutdown, the American Pug Breeders Association announced a recall Monday of all pugs produced between February 2006 and the present day.

"We apologize wholeheartedly to any and all owners of the 2007 pug," APBA director Betty McAndrews said at a press conference, standing before a table where 10 defective pugs were displayed. "While pug owners are accustomed to dog malfunction, the latest animals are prone to more problems than just the usual joint failures, overheating, seizures, chronic respiratory defects, and inability to breed without assistance. The latest model pug is simply not in any way a viable dog."

Read the whole thing. A hat tip to Janeen at Smartdogs for pointing this one out to me.

Of course, there is more truth here than you can imagine. As Pugvillage.com notes:

The bottom line regarding Pugs and health is that Pugs are prone to a myriad of genetic health issues, and require more veterinary care than the average breed of dog. If you get a Pug, be prepared to make a lot of trips to the vet... . If you don’t have the time, money or willingness to commit the next 12 years to a dog that may have frequent and significant health problems, don’t get a Pug.

Hmmmm. Maybe another better way of saying that is: "If you object to intentionally and willfully inflicting a lifetime of unnecessary misery on a dog, then club anyone who breeds or even owns a pug."

Because that is what a pug is all about. This is a basket-case of a dog. Due to their pushed-in faces, these dogs are known to overheat while sitting on the couch in an air conditioned room. Run around in a field? Play catch? You have to be kidding! A pug's respiratory system is so defective-by-design (another case of the Kennel Club embracing defect and deformity) that the dog can do little more than catch a cold.

As for giving birth, forget it. Here too the Kennel Club has embraced a standard for defect and deformity, prescribing a dog with a huge head and narrow hips. The result is a dog that not only cannot give birth without cesarean section in most cases, but in many cases it cannot even mate!

Yes, that's right: most pugs are artificially inseminated because the dog is so structurally unsound it cannot even have sex!

But, of course, that's not all that comes with pugs. This dog is also known to have frequent eye problems (cataracts, corneal ulcers, dry eye, ingrown eyelashes, Progressive Retinal Atrophy) as well as elongated soft palettes, encephalitis, hip dysplasia and legg-calvé-perthes to name just a few problems.

And did we mention nearly intractable skin problems? Yep, this dog is likely to have that little misery to contend with as well.
.

On my end I am sick of seeing genetic messes that include behavioral problems in many of the purebreds I encounter.

I just wonder what the answer is to these issues...do you have opinion on this (silly question I know)?

What can people do to put pressure on stopping such irresponsible breeding?

I knew you'd appreciate this - and take it to the next level. Thanks for the plug -- but you entered my url wrong it's:

This makes me think of a pug I saw once in a small town in Taiwan. It was fawn colored, and its face had a puggy look, just not at all exaggerated. Its body, though, had normal small dog proportions.

It was also lively and funny and running around like mad. All the usual pug personality in a functioning body. Made me think I was looking at a primitive style pug. Unfortunately the owner was not around to ask for details. But it was dog a reasonable person could actually want for a companion.

You forgot hemivertebrae and luxating patellas...

You should see if you can find Hogarth's self portrait with his pug named "Trump." Trump looks almost nothing like these dogs. He has an "apple head," and his features are far less exaggerated.

These little brachycephalic dogs have been in East Asia for millennia. Small dogs with short muzzles have been found in kitchen middens in the Gobi Desert that have the features one would expect in the pariah dog that would be the proto-pug, peke, tibetan, and Japanese Chin. (Although it's certainly very difficult and unscientific to say that these dogs are the ancestors of these breeds).

Pugs have been crossed with small bulldogs in Britain. There were once brindle pugs that very closely resembled French-type bulldogs. I've even seen a few pictures of white and parti-colored pugs. The modern bulldog was also created through pug-bulldog matings.

However, pugs are in the same family of breeds that includes the peke, the shih tzu, the Tibetan spaniel, and the Japanese Chin. It's definitely not a bulldog or molosser breed.

Pugs were among the first mass-produced pet dogs. If the breed was popular before 1900, you can almost guarantee that it has experienced capricious and unhealthy breeding practies that have somehow left their mark. If you look at the dogs that are used for anything, none of them come from breeds that were recognized in the nineteenth century as show dogs and then also became popular as mass-produced pets are useful for anything now.

The big 150 plus pound Newfound,lands lack the endurance to haul anything over a long distance. They were once also used as watefowl dogs and were crossed into retriever lines as late as the early twentieth century. By then they became too coarse and heavily boned to be useful. I have a flat-coated retriever book that says that the Newfoundland influence in some flat-coated retriever lines is something that should be bred away from. This also affected the golden retriever in its development. Mrs. Winifred Charlsworth (an early founder of the golden retriever breed as distinct from the flatcoat) refused to breed any golden retrievers, which were then just separated from the flat-coat lines that showed any excessive bone or Newfoundland qualities. These are the exact qualities that show golden breeders like to put in their dogs.

Some user on youtube has reposted parts of the "Pedigree Dogs Exposed" documentary, specifically the part about Basset Hounds. I had an exchange with a breeder who was defending the fancy. This person claimed to be a coohound breeder of dual purpose coohounds. I didn't ask the breed, but I'm assuming black and tans, because those have been bred as show dogs for a really long time. This user claimed that the excessive skin was functional on a scent hound, because it trapped the scent. Then I told her that my neighbor, who owns brace of treeing walkers and a plott, has specifically told me that the show type coonhounds have too much skin to be useful. This skin gets caught in the briars and the exposed haws often lead to cherry eyes and other eye infections.

I ended the exchange with simply stating that my own friends who use coonhounds for their intended purpose don't believe in excessive skin or using 80-100 pound dogs. The working type black and tan is a much smaller dog than many people assume. And the working plott that is used on bears is suprisingly small.

I think these dog show breeders need to take up showing pigeons or hamsters or some other species of animal that has no real intelligence or purpose other than being looked at. I mean in Britain, there is a Hamster Society, with actual Hamster Conformation shows. A hamster is an extremely stupid animal that lives only about two or three years. Those animals could be breed in so many different breeds, and they wouldn't be destroying any species long term, because a hamster has no purpose other than being a labratory animal (and only rarely these day), a food source for pet snakes and lizards, and a pet that regularly bites its owner or escapes for days on end.

And pigeon shows? Those are really a good idea. That's one of the places that gave Darwin his ideas about natural selection, but he identified that process as artificial selection. I mean we have freak pigeon breeds, like pouters and tumblers.

Those are some alternatives that those who like to play God with useful animals might want to consider. Start playing God with animals that have no real purpose.

As for behavior problems and breeding, I think a lot of the behavior problems are caused by poor socialization, which is a nuture issue, rather than a nature issue if you know what I mean. That said, I also do not believe there is such a thing as "responsible" breeding within a show-ring closed registry system. It is, by definition, irresponsible because it will ALWAYS result in defect, deformity and disease if maintained as a closed registry for 50 years. Job one is breeding for more than looks, and for allowing more genetic and visual diversity within breedy type.

I just saw this Pug-mix (Puggle maybe?) and thought it looked like what a 'healthy' version of a Pug should look like. He's quite cute!

I do think you are right even though I own a pug. (from rescue) Of course I got lucky and she can not only breathe normally but is a fabulous tracker. I discovered it by accident when she air scented something for me one day. Decided to try her in the field and was astounded. But I digress. It is to bad more clubs don't put health before looks.

I wish I could read your blog regularly but the sheer number of posts per page make it difficult for my computer. I'm sure I am not the only one having this issue. Would you consider formating less to a page so it is more easily accessed by us who have substandard computers? It never hurts to ask. :-)