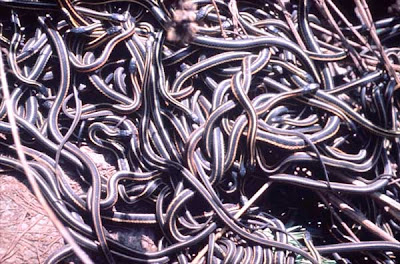 My folks live in a section of Washington, D.C. that has a fairly vibrant "alternative lifestyles" population.

My parents are pretty tolerant and assume people do not have much choice about their sexual orientation, and no doubt they are right. Besides, what concern is it of anyone else? My folks ask of their gay neighbors the same as they ask of all the others: help keep litter off the sidewalk, plant flowers in your front yard, and keep everything well-painted and maintained. By those standards, the gay neighbors are often among the best.

That said, I was somewhat amused to learn my folks had a group of neighbors over for dinner a few evenings ago. The gay neighbors are no big deal -- most are otherwise very square. But what about the new cross-dresser next door?

Oh, of course he was invited.

And what did he wear? A nice dress, and I think some falsies.

Like I said, my folks may be pushing past 70, but they are nothing if not broadminded. My father says the cross-dresser is extremely well-informed on international finance, and no doubt he is. It's not a cheap neighborhood.

Oddly, humans are not the only animals that engage in cross-dressing or have transgender identity issues; a lot of animals also have "gender-bender" sex lives.

Garter snakes, for example, not only engage in orgiastic bouts of group sex, but male cross-dressing garter snakes also show up for the festivities, oozing a female sex pheromone designed to confuse the other male snakes and give the cross-dressing snake (or so the theorists say) an opportunity to get in and inseminate the female before it is picked off by a predator.

The hyena is another cross-dresser, with male and female hyenas appearing to present both sets of sexual organs. In fact, hyenas are not true hermaphrodites, simply such good pseudo-hermaphrodites that the ancient Greeks were convinced they could change from male to female at will.

Then, of course there are fish, which really can change from male to female (and back again) at will. It turns out that if you toss a school of female salmon or hammerhead sharks in a tank, some will morph into working males.

Scientists call these sex-change artists successive hermaphrodites, and the phenomenon is far from uncommon. In fact, a huge number of fish (more than 100 species) will readily change genders, and some species of fish routinely change genders several times over the course of their lives.

Along with piscine sex-change artists, you also have fish that are simultaneous hermaphrodites. These are fish which come equipped with both testes and ovaries, and which normally produce eggs for about half their spawns, and sperm the other half.

There are other types of gender benders as well: homosexual seagulls, dogs, sheep and beaver, for example, and the occasional female bird which (due to disease, age or congenital defect) starts producing testosterone and develops both male plumage and a male sex drive.

At least one species of African frog is a sex-change artist, and in quite a few species of animals, the male takes over the duties normally "assigned" to females, such as is the case with the seahorse

Bottom line: It's a pretty wild world out there.

And to be clear: I'm not saying you're not feminine; I'm just saying you should shave closer.

All good and remember to respect all and love everyone for who they truly are.  Always.
.
Share