Some Digs are Easy ... and Some Aren't

.
Went out for a few hours on Sunday.

Mountain found a small groundhog is a forest sette.  That dig went fairly uneventfully, though it was in a kind of "secret garden" in the middle of a couple of downed trees that had vines covering them. The photo above looks like it was shot at night as a consequence, but it was taken about 1 pm (I went out late due to the very hard rain that we had the night before).

At the next farm, Mountain found again, this time on a ridge above a pasture. High-tension wires were about 150 yards off, and the Deben box would not work (it would work 20 feet away, but we were right on the edge of the radio corona from the lines).

I listened to the dog and managed to find the pipe with the first hole I dug, but I also discovered that the ridge was almost solid rock -- it took me more than an hour to drop a hole 2 feet. I tried to guess the location of the pipe for the second hole, but after another hour of digging through even harder rock,  it appeared I had missed.

I decided to pack it up for the day after both dogs took some injuries from this fortified groundhog in his rock-solid one-eyed sette. Score one for that groundhog! We won't be back next weekend -- the dogs need to knit up, especially Mountain who took a rip near his eye and wore away small patches behind each ear from banging on the rock ceiling of the pipe.

The picture below  is of stone klitter kicked out of another hole we passed by on an earlier ridge.  This stone is white, but the stuff we were cutting into one ridge over was dark blue or even black, and much harder.

Email ThisBlogThis!Share to TwitterShare to FacebookShare to Pinterest
Labels: Mountain

Went out with new diggers Susan and Brian on Sunday.

The dogs found right out of the car, but lost it in the dirt, and at the depth the box was reading, I was more than willing to take my chance on another hole. Susan and Brian's Emma went right in, which is very nice to see on a very green dog.

We nailed a year-old chuck that was very difficult to tail out in a shallower hole, then swept down the creek and back to the car for a cooler hedgerow sette.

The dogs found in a nice cool patch in the woods on the second farm, and we dug down to another one-year old groundhog that was well located for Susan's Emma to school on. Emma pulled the groundhog out (it did not have too much den pipe left) and that was that. No damage to the dogs or humans, and back on the road by 2 pm. All in all a very nice day. 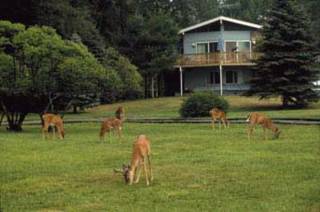 It's hard to believe, but as late as the early 1960s, Virginia was importing whitetail deer (whose species name is Virginianus).  Today we shoot 200,000 deer a year in this small state alone (37th in size out of 50), and the numbers keep climbing, as they do in much of the rest of the country.

Now even environmental organizations, like the National Audubon Society, are arguing that more hunters are needed if we are to preserve the understory for birds and other wildlife, and if we are to avoid the hundreds of thousands of car-deer impacts that occur every year -- 40,000 a year in Pennsylvania alone, most of them wrecking the car, and some killing or seriously wounding the driver or passenger as well

New Book on Lurchers and Terriers

Paul Dooley has written a new book on lurchers and terrier work in the U.K. entitled Stormy Nights and Frosty Mornings .

You can now order this book by credit card and on line at: http://www.terrierman.com/dooley.htm . Prices posted are in U.S. dollars, Pounds Sterling and Euros, and include shipping.

Six Before Lunch with the Ladies

Back in June, Shanon and Dorothy and I had a nice day in the field, racking up 5 groundhogs by 11:30 and then switching farms to nail the 6th before quiting by 1:30. Excellent weather, shallow digs, easy locations and small groundghogs to school the younger dogs on. I was back home and at the baseball game a little after 3 pm.

The pic above is of Shannon's dog, Lore coming out of a pipe.

This pic (click link) is of Mountain nose-to-nose with a groundhog.

This pic is of Shannon's dog, Lore, frozen in position. Those nitrogen tanks are heavy!
No comments: